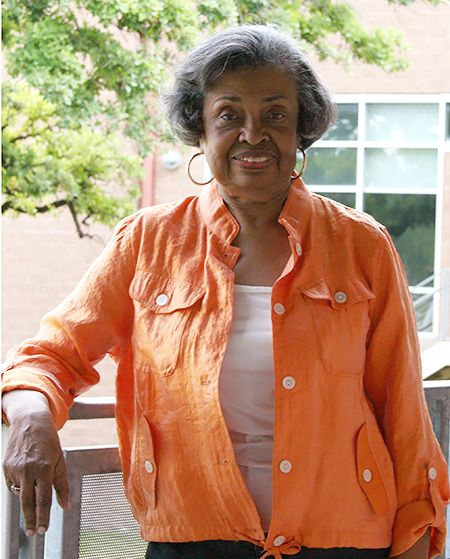 This week, we’d like to share a food story from the neighborhood. In 2014, Kealing Middle School students embarked on a Neighborhood Stories Project (NSP) to get to know long-time residents in the Kealing area. The project started because of the Kealing school garden and its wide-reaching impact on uniting the school community. Nine Francois, the NSP Coordinator at Kealing Middle School, shares more about the project and its impact. Be sure to follow the link below to read a student’s interview with an East Austin resident, Ms. Betty Washington.

In 2012, parents, students, and neighborhood volunteers transformed a barren stretch of earth on the west side of the Kealing Middle School campus into what is now the Kealing Gardens. Today, it includes 11 beds, an outdoor classroom, a perma-culture garden, a garden shed with water collection system, up-cycled garden art, and a community gathering area of benches surrounded by fruit trees.

A year after its creation and under the guidance of science teacher Lucinda Pogue, the Gardens became the center point of the newly adopted Eco-Rise Science curriculum at Kealing.

The idea behind the creation of the Kealing Gardens was to connect multiple groups of KMS students through the commonality of food – its production, consumption, and the culture/history that supports it – and to provide opportunities for team-building among the student body as well as between the school and the community. To this end, various spin-off projects were spawned from the gardens, several of which have taken on their own momentum.

One of these spin-offs is the Neighborhood Stories Project (NSP). NSP pairs KMS students from Kristen Scott’s year book class with local residents and business owners to produce a series of profiles of the people who live and work in the Kealing area. Armed with theme-specific questions, recording devices and cameras, the students spend an afternoon honing their journalistic skills while conducting these real-life interviews to learn what they can about the community adjacent to their school. Students are escorted to these off-campus interviews by volunteer photographers who help students execute environmental portraits to accompany the stories.

As one of the accompanying volunteers for the past several years, I can attest to the goose-bumpy connections that are made during these encounters. Old and young, black and white, fast and slow, brown and black – whatever the differences between interviewee and interviewers, they melt away as these kids listen to and learn from the stories offered by their hosts. In many instances, both students and interviewee end the session with heartfelt hugs and an expressed appreciation for having had the opportunity to get to know the other. On the walks back to campus, KMS students frequently say they’ve never met anyone like the person they just interviewed which invariably leads to a conversation about the richness of the varied cultures of East Austin.

Each year, the Neighborhood Stories Project focuses on a specific theme. In 2014, the students interviewed longtime residents about the types of food they ate and what the food culture looked like when they were kids. In 2015, the questions revolved around the many changes that are currently taking place in east Austin.

When finished, these interviews and accompanying photographs are transformed into informative, award-winning profiles that are proudly displayed at the annual Kealing Gardens Spring Harvest Picnic. Subsequently, they are collected by the Austin History Center where they are archived for public access. A future exhibition of these profiles is currently in the works.