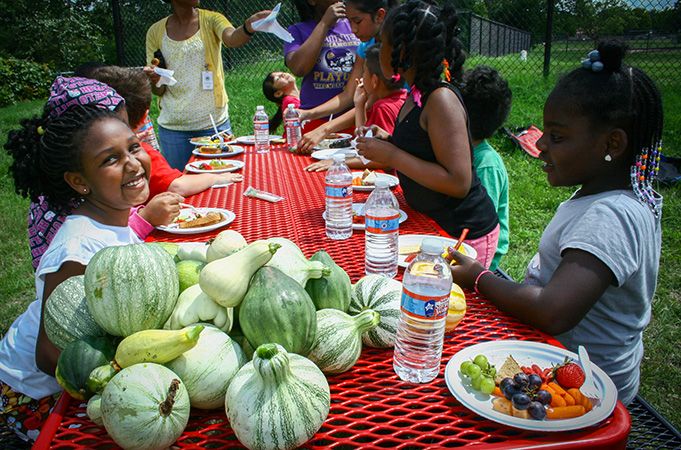 School lunches have dramatically evolved since they were first introduced in schools as early as the 1890s. However, lunch programs only existed then in select schools and were mostly a for-profit endeavor. Lunch programs evolved to focus on providing nutritionally sound meals and low prices to children who would not otherwise have consistent meals. In the early 1900s, nutrition scientists developed menus to provide students with the number of calories necessary to maximize their learning potential. American school children were often the focus of studies related to food – primarily the connection between diet and academic achievement. In the 1930s during the Great Depression, the U.S. government expanded the school lunch program, and school lunches included foods supplemented by local contributions and surplus commodities. Fresh, healthy foods occasionally came from school gardens and local farms. However, issues of distribution and storage created challenges to accepting fresh produce. During World War II, many schools planted Victory Gardens and used the harvest in school lunches. As the number of schoolchildren dramatically increased following World War II, school administrators struggled with the capacity to feed such large numbers, and they sought cheaper, efficient ways to feed students.

Fast forward to today when school lunches across the nation are primarily sourced from large distributors that purchase and ship processed meals and produce from far away. While some school districts are able to purchase regionally sourced produce through Farm to School programs and offer healthier menu options, this is not the norm (yet!). It is also unlikely that the school garden is the sole source of food for the cafeteria; however, there are still opportunities to include the school garden harvest in the cafeteria in a tasty, fun, and safe manner. Veggie Samplings in the cafeteria are a great way to share the school garden harvest with the whole school and create opportunities for learning what produce is in season and even how to prepare and eat it by having a few recipes on hand. There has been fear around food safety issues, so school districts across the country have created protocol regarding serving school garden produce in the cafeteria. There are also national resources that provide guidelines and suggestions, such as the ones below:

We encourage school garden leaders to find opportunities for sampling the garden produce with their classes and in the cafeteria so that the school garden becomes an even more visible and integral part of daily school life and gives kids the chance to crunch, sniff, and nibble on something new, fresh, and delicious straight from the garden.