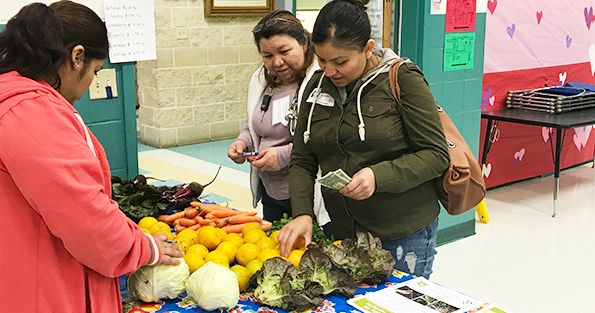 Pictured Above: Our first customer, Alondra, at our Fresh For Less Farm Stand at Hart Elementary!

We first met Betty at a parent meeting at Hart Elementary. She was the kind of parent that showed eagerness through her eyes and her posture. We gave a presentation about our SFC Farmers’ Markets and SFC Double Dollars and shared about a newer initiative we are working on with communities – Fresh For Less Farm Stands. Her interest sparked and she asked what she could contribute to move this project forward.

Betty spent time in the neighborhood, at the Recreation Center, at the playground and at her school surveying and speaking with her community about the Farm Stand. Collectively it was decided that Dobie Pre-K would be an ideal location as a start. When we opened the Farm Stand at Dobie Pre-K in the fall semester, Betty continued to advocate for a Farm Stand at Hart. She believed that this would open the door for children and their families to be exposed to fresh fruits and vegetables at their school from a young age, and that this second Farm Stand would build the bridge to continued access to healthy, affordable local food when they moved on to Elementary School.

Fast forward and Betty is running two Farm Stands to serve her community. Her son attended Dobie Pre-K before graduating on to Hart Elementary, so she has strong connections at both schools. Dobie Pre-K is open on Wednesdays, and on Thursdays Betty sets up at Hart Elementary. She is known across the community and her approach to outreach is creative and effective. We can see and sense her joy as she engages her community around food.

Betty is building bridges in more ways than the Farm Stand. She is taking a leadership role with Famlies as Partners as well as with the PTA at Hart. She’s participated in our own Community Garden Leadership Training, keen to learn more about ways to get involved with her community. Although she is not currently growing her own garden at home, she exclaims “No cultivo pero si consumo!” (I don’t cultivate it but I do consume it!) By learning about various aspects of the local food system, Betty is growing expanding her awareness and inviting others to join her on this path.

Fresh for Less Farm Stands are part of a city-funded initiative to bring healthy, tasty food to area residents. They are spaces where community members can purchase locally-grown produce at a low cost, engage in the local food system, and gain access to knowledge about cooking healthy food. Farm Stands are located in high needs areas and are fully operated by leaders from their community. SFC is proud to collaborate with Farmshare Austin and the City of Austin to make this project possible.