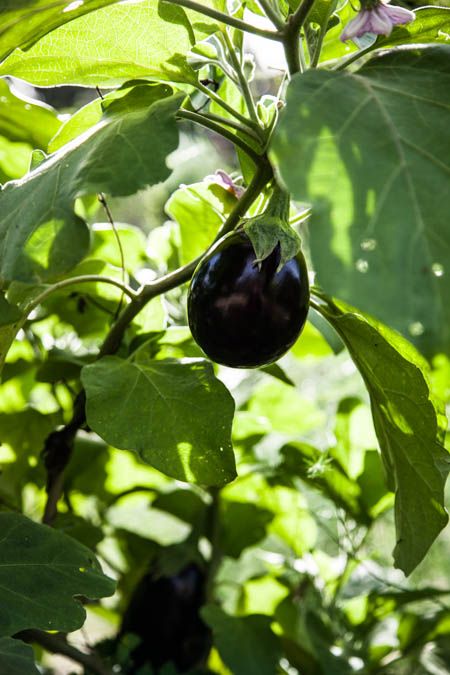 Whether you call it an eggplant or an aubergine, the typically purple Solanum Melongena is a tasty vegetable that has long been misunderstood. Early Europeans called eggplants “mad apples,” certain that the eater would turn insane; alternatively, they were called “apples of love” for their supposed aphrodisiac qualities. From its origins in India and China, the eggplant spread in popularity across Asia and Europe. However, in the U.S., it remained ornamental, rather than edible, only until around 50 years ago.

Despite their confusing history, eggplants are delicious, nutritious, and easy to grow. Eggplants are in the nightshade family, related to tomatoes, peppers, and potatoes. They are high in fiber, iron, folate and potassium, as well as antioxidants that may prevent cancer and other diseases. Although the most common varieties are purple, eggplants can also be white, green, even yellow, and come in all shapes and sizes from short and round to long and thin. The most common varieties grown in Texas are Black Bell, Black Magic, Epic, Classic, Florida High Bush, Florida Market, and Night Shadow.

Eggplants grow well in Central Texas this time of year because they love the heat. While other vegetables struggle through the summer, eggplants will keep producing until fall. Eggplants can be started from seed, but if you are new to gardening, planting transplants is a safer bet. Plant eggplants in sandy loam soil in full-sun about two feet apart, as they can grow up to four feet tall. If you start the eggplant from seed, plant the seeds about half an inch in depth. Transplants should be planted deep enough to cover over the root system. Add compost to the soil before planting and an organic fertilizer after planting. Water the eggplant at least one inch a week, watering less rather than more frequently.

Eggplants take time to grow, typically between 80 and 90 days from seed. The fruits add beautiful color to your garden when they appear, a nice complement to ornamental flowers. Harvest when you can press your thumbnail into the fruit and the dent you make remains in the flesh. Young eggplants can be just as tasty as full-grown ones. It is best to cut rather than rip off the fruit from the plant, and handle it gently to prevent bruising. Eggplants generally do not stay fresh if stored for a long time, so prepare and consume them soon after harvesting.

When you are ready to eat your eggplants, you have a variety of options for preparing them, including baking, grilling, stewing, stir-frying, and more. Asian, Middle Eastern, and European cookbooks are full of traditional eggplant recipes. Try them roasted and stuffed with lemon and garlic or grilled on top of pizza with feta cheese and greens.

Since it’s time to plant, but not yet harvest eggplants in Central Texas, this month try your hand at our favorite Beans and Greens recipe. Greens of all types—turnip, beet, spinach, collards, kale and Swiss chard are plentiful in gardens and at the SFC Farmers’ Markets right now. Use any type of green in this forgiving recipe, keeping in mind that collards, kale, turnip and beet greens will need to cook longer than swiss chard and spinach. Keep a look out for eggplant recipes in this column in a few months when eggplants are ready to harvest!

Heat oil in large skillet. Sauté onion for three minutes. Add garlic and jalapeno and saute until soft, another 5 minutes. Add sausage and cook until it is lightly browned. Add broth, beans, tomatoes and greens to sausage. Cook at a gentle simmer so that flavors have a chance to meld, making sure greens are still nice and green, about 15 minutes. (If you are using a more delicate green like spinach or Swiss chard, add the greens towards the end, allowing them to cook no more than four to five minutes).

Remove from heat and add cilantro as a garnish. Serve alone, or over cornbread or rice.