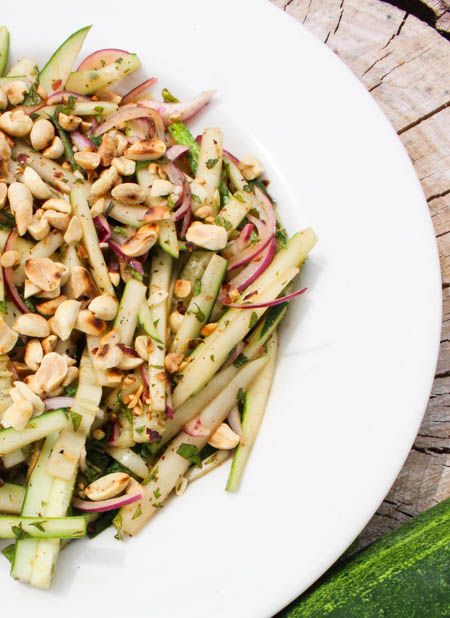 As we head into the heat of August in Austin, the saying “cool as a cucumber” takes on a whole new meaning in the garden. Cucumbers (Cucumis sativus), part of the Cucurbitaceae family that includes melons and squashes, are a refreshing vegetable to grow in the summer as they contain over 95% water. They originate from Asia, likely from India, and they have been cultivated for over 3,000 years. In fact, the legend of King Gilgamesh references the tasty vegetable around 2500 BC in the Middle East! Cucumbers eventually made their way into gardens in Europe and were referred to as “cowcumbers” by English writers. They also spread to Africa and the Americas over several centuries and are now grown in tropical and temperate climates alike.

Cucumbers come in all shapes, colors, and sizes. They are typically categorized two ways: “Pickling” cucumbers, which are small, have thin skins, and are made into pickles by brining with salt, and “slicing” cucumbers, which are longer, have thicker skins, and are great for slicing and eating fresh. Slicing varieties to grow in Texas include Poinsett, Straight Eight, Sweet Slice, Sweet Success, and Market More. Popular Texas pickling varieties are Carolina, Fancypak, Multipik, and National Pickling.

Plant cucumbers at least 2 weeks after the last frost of the New Year, from March to April, or plant them August through early September, so they have time to set fruit well before the first frost of winter. Grow cucumbers in full sun in larger garden areas or contained with cages or trellises, as their vines tend to creep several feet and take over garden spaces. They flourish in sandy loam soils or soils with good drainage. Amend the soil with compost before planting your cucumbers. Create beds that are 4-6 inches high and 36 inches apart using a shovel or spading folk. Plant 3-4 cucumber seeds 1 inch deep in these beds about 12 inches apart.

Once seedlings emerge, thin out the small plants and let the healthy plants grow. Guide the vines vertically along a fence, trellis or cage, or let them grow along the ground if you have sufficient space. Water the cucumbers on a weekly basis once established, and weed around the beds. You will see two flowers develop, male flowers that appear first and drop off and female flowers that remain to grow the cucumber fruit. If a cucumber grows misshapen, it could mean that the plant was poorly pollinated. You can help along the pollination process by gently brushing together the inside of each male and female flower. Grow plants and flowers that attract bees near your cucumbers to improve pollination and to produce tastier fruit.

Monitor regularly for insects and diseases, such as banded or spotted cucumber beetles and squash bugs, and use organic deterrents such as neem oil to control them. Harvest cucumbers when they are firm, green (yellow cucumbers are too old, so pick before this stage), and the size you want to eat. Pickling cucumber should be 3-4 inches long, and slicing cucumbers should be 6-8 inches long. The seeds of cucumbers develop a bitter taste as they mature, so remove the seeds of older cucumbers before eating them. To make them last, store harvested cucumbers in the refrigerator for up to 10 days.

Cucumbers are a good source of Vitamin C and K, manganese, copper, and potassium. They also have anti-inflammatory qualities and contain antioxidants and polyphenols that may reduce the risk of cardiovascular diseases and some types of cancer. Cucumbers are typically eaten raw in refreshing salads, cold soups, and sauces such as Indian raita and Greek tzatziki. They can also be eaten cooked, as well as pickled in salt brine to become tasty pickles.

Below is an easy dish that uses fresh cucumbers. Mint is plentiful at this time as well. Chili paste can be found in the “Asian food section” of many grocery stores and once open, the jar stores well in the refrigerator, covered.

Chop cucumbers, onion and mint and place aside in a bowl. In another small bowl, combine chili paste, lime juice, vinegar, sugar and salt and whisk until combined. Pour liquid over cucumbers and gently mix. For best flavor, allow dish sit at room temperature for approximately 15 minutes, then garnish with roasted nuts.