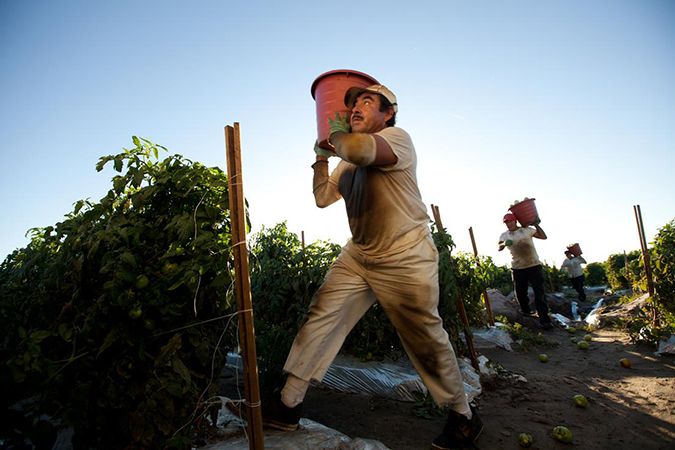 The Hands that Feed Us: Farmworkers, Food Security, and a Fair Wage

“(Farm workers) are involved in the planting and the cultivation and the harvesting of the greatest abundance of food known in this society. They bring in so much food to feed you and me and the whole country and enough food to export to other places. The ironic thing and the tragic thing is that after they make this tremendous contribution, they don’t have any money or any food left for themselves.” Cesar Chavez

Over fifty years ago, in the midst of a nationwide struggle to ensure fair wages and safe working conditions for farmworkers, Cesar Chavez, leader of the United Farm Workers labor union (UFW), drew attention to a problematic paradox affecting the country’s food system. Farmworkers were responsible for feeding not only the United States but much of the world. Their labor contributed billions of dollars to state economies each year. Despite these facts, most farmworkers earned too little to adequately feed themselves and their families.

This paradox persists today. Throughout the 1960s and 70s, the UFW worked to increase farmworkers’ wages by encouraging field laborers to form local unions and by supporting walk-offs, strikes, and boycotts. Despite a number of successes, farmworkers today have the lowest annual family incomes of any wage and salary workers in the United States. Indeed, even though most field laborers are expert food growers with years of agricultural experience, over 60% of all farmworkers have total family incomes below the poverty line.

Farmworkers earn poverty wages for two main reasons. For one, employers take advantage of loopholes in federal minimum wage laws. Most field laborers are paid based on how many buckets or bags they pick of whatever crop they harvest, a system known as “piece rate.” Often, farmworkers being paid by piece rate make less than the minimum wage. To compensate for this problem, in 1966, federal law began requiring employers on large farms to pay minimum wage if a worker doesn’t earn it based on the piece rate; however, about one-third of farmworkers work on small farms, which are not subject to federal minimum wage laws. Additionally, if a farmworker is hired through labor contractors, which approximately one half of all farmworkers are, then growers can avoid state and federal-level employment laws, including minimum wage.

For another, most farmworkers are not U.S. citizens, and they are therefore vulnerable to wage violations and even wholesale wage theft. At least 50 percent and as much as 70 to 80 percent of the nation's farm workers are undocumented and risk deportation if they demand fair wages. “Legal” farm workers who have come to the United States as part of the Guest Worker Program are also fearful of demanding fair wages, for they are bound to employers who “import” them. If they complain about wages or abuses, they face deportation, blacklisting, or other retaliation.

The consequences of these workplace practices are dismal: in the past twenty years, farmworker wages have declined by more than 20% after accounting for inflation, making farmworkers some of the most food insecure people in the United States. While about 15% of American households report food insecurities, in some regions, up to 82% of farm workers are food insecure, meaning that they and their families cannot access the food necessary to live healthy, active lives.

Fortunately, farmworkers are banding together, forming unions and demanding fair wages. The Coalition of Immokalee Workers (CIW), a farmworker based human rights organization, is leading this new generation of labor organizing. Since 1993, the CIW has been successfully campaigning to increase the wages and improving the working conditions of tomato growers in Florida. (http://ciw-online.org/) The organization has used a range of tactics, including nation-wide campaigns, to convince retails outlets to adopt the Fair Food Program. (http://www.fairfoodprogram.org/). Designed, monitored, and enforced by farm workers, this program harnesses consumer power to ensure that retail outlets purchase tomatoes from farms that pay fair wages and ensure their workers’ well-being and safety.

As consumers and citizens, we can support these efforts in a number of ways. We have the power to sway policymakers by letting public officials know that we will not tolerate poverty wages and wage theft in the food system. We can also impact retail companies by shopping at stores that have adopted the Fair Food Program and by boycotting companies that refuse to accept farmworkers’ demands. Last but not least, we can educate our communities about the relationship between food security and a living wage, expanding the definition of sustainable food to include sustainable working conditions and helping to build a food system that is accessible to all people, including the farmworkers who feed us.