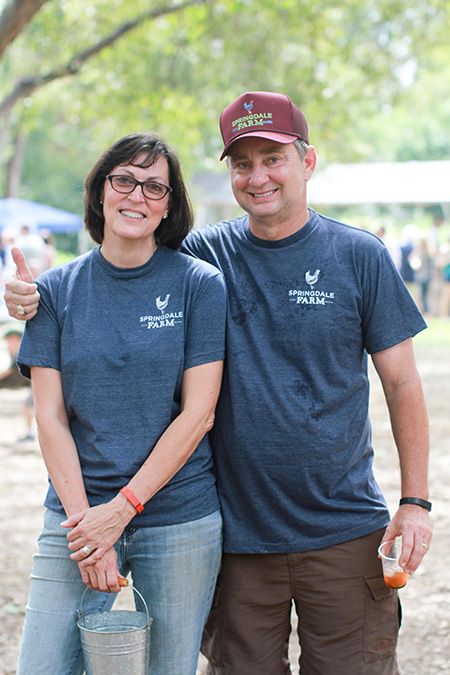 Our food story begins with what I thought was a simple question. What made Springdale Farm owners Glenn and Paula Foore decide to get into farming? “You’d think that’s simple, but that’s absolutely not a simple question.” Since 1992, the Foore’s landscaping and irrigation business has been tucked away on Springdale Road between East 7th St. and Boggy Creek. Since then, it has evolved into a meeting space for veggie enthusiasts and a community hub, and they have recently partnered with SFC on the Double Dollar Incentive Program and the newly launched Buy Fresh Buy Local Central Texas branding and marketing campaign.

The landscape business took twists and turns until the recession pushed them to expand the garden that they’ve had since the beginning. At first, their family garden was 1/3 of an acre, but their beautiful property and healthy soil caused both veggies and people’s interests to bloom. For Paula and Glenn, it is the desire for the farm to be a space where people gather that inspires them. “We had friends over to help weed… and then we harvested and then we had a meal together and it was that moment for me that was like, ‘wow, this part of community, this part of sharing,’ that was the aha moment for me.”

In 2009, the farm became a regular meeting space for chefs, neighbors, and other food lovers. With gorgeous gardens, an indoor farm stand, and the shade of giant pecan trees, Springdale Farm lends itself to being a gathering space. The Foore’s hope that by participating in SFC’s Double Dollar Incentive Program, that this will become a meeting space for others in their neighboring community, as well. The Double Dollar Program allows Springdale Farm to not just accept SNAP (formerly known as food stamps), but to match up to $20, which basically cuts the cost of healthy food in half for folks using SNAP benefits. “We want it to be accessible.” Springdale Farm will also be members of the Buy Fresh Buy Local Central Texas chapter in order reach new customers. This effort uses mobile marketing and an identifiable brand to get the word out to people about where to find local food, because, as Paula says, “We’ve always been about local.”

The future of Springdale Farms is fueled by Paula’s awe of farming. Beyond the farm operations, spreading their enthusiasm about plants and their connection to community is one of the goals of their non-profit, Springdale Center for Urban Agriculture. Although the path to farming may have been winding, the Foore’s passion for it is quite simple. As Paula said, “It is like a little miracle when [plants] come in.”