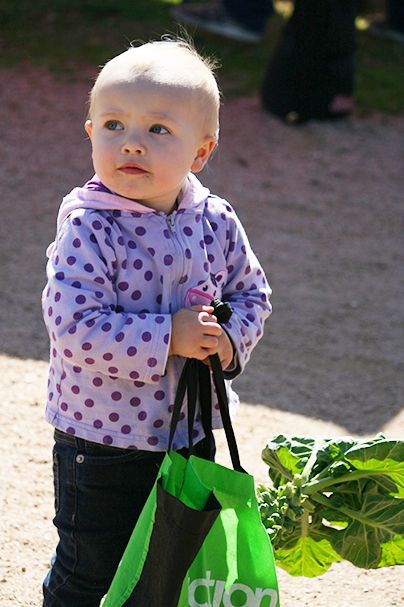 Here at Sustainable Food Center, we know that food inspires and transforms lives. To honor those experiences, we are collecting food stories from folks around the community. Here is Jacqueline's story:

Every week, Jacqueline and her family walk down the row of farmers at the SFC Farmers’ Market at Sunset Valley and stop at the Double Dollars booth to pick up their WIC and SNAP benefits. Originally being drawn in by the “awesome vegetables,” they have made it a regular event for over three years. As she put it, “when you’ve had homegrown stuff, you know how much better it is. And really, I think that it’s the tomatoes that ultimately drew me here, because there’s nothing like a home-grown tomato.” Almost every week, they come by, chat with market staff and farmers, do their shopping and now with their 18-month old addition, Emme, play in the playground at the market and say hello to all of the dogs.

As it happens, Jacqueline’s family has roots in agriculture. “My grandparents since I was a little kid have always farmed… even when they lived in the city in Illinois, they had a farm in their backyard.” Although her parents’ generation wasn’t as involved in food production, her grandparents got her into gardening. When she and her cousins were children and they would visit their grandparents, they would help with the gardening. “We would always help them and it was fun!” She’s carried those values into her adulthood and is passing them to the next generation.

“Even when I lived in an apartment, I’d have jalapenos growing in a pot on the patio.” She would also grow herbs like rosemary, mint, and basil. When Jacqueline got pregnant with Emme, she starting being more aware of what she was eating and decided to be more particular. “I’m not eating anything bad for me… only organic stuff, only home-grown stuff.” Now Jacqueline and her family have a backyard garden where Emme is involved. “One of her favorite things to do is to go pick stuff out of the garden.” One of her hopes is that they have instilled good eating habits in their daughter. “This morning, she had a Farmers’ Market tomato, a whole one, and she’s eating it like an apple.” Those sure sound like good eating habits to us!