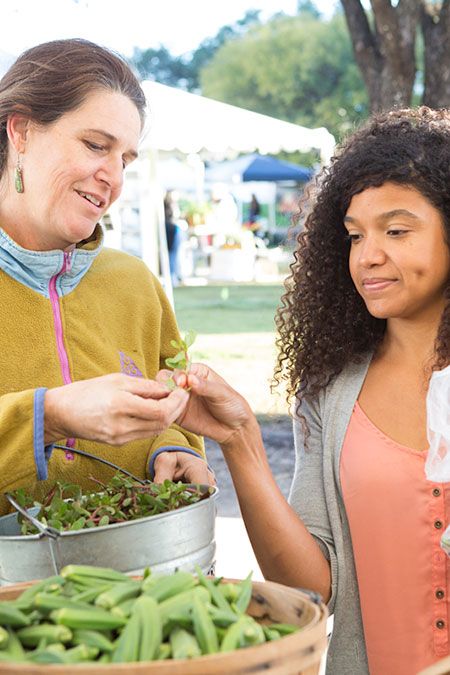 A Year of Resiliance

Farmers are resilient folks. After a year of continuing historic drought, tens of thousands of plants lost to May freezes, 90% loss on the peach crop, floods in neighboring communities, and continuing water battles, one of our vendors could only laugh and say, “Well, if you are knocked flat on your back, then the only place you can look is UP.” It’s this spirit that truly defines our success at the farmers’ market, and despite the odds, 2013 was still a year to celebrate. Join me for a little walk down memory lane to recognize the accomplishments of the past year at the SFC Farmers’ Market sites – Downtown, at Sunset Valley, at The Triangle, and East.

In 2013, we maintained our steady overall economic impact of $3 million dollars of exchange at the markets. Yes, the farmers and vendors, through the direct relationships that they have with customers, keep their farms and businesses viable because of the commitment that shoppers have to putting their dollars where their hearts are – with the farmers and small food and artisan enterprises. The markets obviously saw a lot of customers – up to 232,470 visitors! On behalf of the 111 vendors that graced the SFC Farmers’ Market grounds during 2013, we thank you, Austin!

SFC Farmers’ Markets are consistently recognized for having the highest SNAP (Supplemental Nutrition Assistance Program) and WIC FMNP (Women, Infant and Children Farmers’ Market Nutrition Program) farmers’ market usage in the state, with benefits redeemed for nutritious fruits and vegetables and other sustainably raised dairy, meats, and eggs direct from farmers. Last year, SFC conducted $27,000 in SNAP purchases. We have strong performance in FMNP as well: $37,000 in WIC FMNP vouchers were used to buy fruits and vegetables in the summertime program in 2013.

Even more fruits and vegetables were purchased because of the first (started in 2012) Double Dollar Incentive Program in the state at the SFC markets. In addition to the SNAP and FMNP sales, an additional $37,000 was purchased with “Double Dollars” benefits– a program that matches SNAP or WIC benefits dollar for dollar. We first started the program with the SFC Farmers’ Market East and quickly added the Sunset Valley market in 2012; in 2013 we expanded to all four market sites in October.

All these “first in Texas” programs and incentives to shoppers keep farmers and other vendors coming back to SFC Farmers’ Markets. Market vendors have created an estimated 120 part-time jobs at the four SFC farmers’ markets. More than 50 fruit and vegetable producers, ranchers, and dairy owners in Central Texas are fulltime farmers, with a considerable portion of their income coming from SFC Farmers’ Markets. We also see the markets as a prime opportunity for volunteers to effect change in the food system, while having fun! Almost 800 volunteer shifts are fulfilled in market information booth and food education activities at both markets annually.

All told, the year 2013 was a year that proved the resilience of our farmers and our community, a year that saw vendors creating award-winning food products, a year of continued support by partners and customers, and a year of delicious food.