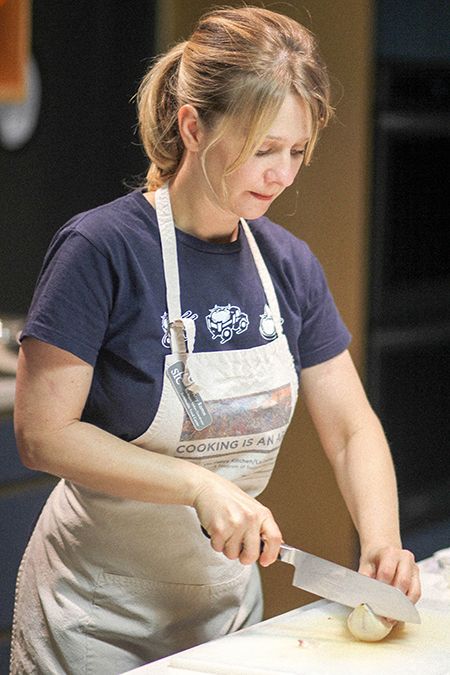 Is Cooking at Home Healthier?

The Happy Kitchen/La Cocina Alegre®’s (THK), goal is for individuals and families alike to cook more often with fresh, whole ingredients. Over the past several months, we have been revising our survey of cooking class participants to capture not just the types of foods participants are cooking with, but also to capture how much participants are cooking as a result of taking our classes. I was pleased to come across this first article from the American Public Health Association’s (APHA) official newspaper, The Nation’s Health. Sustainable Food Center is a member of APHA and THK is modeled on public health principles, so it’s important that we stayed tuned in to trends and research.

About a week after coming across the APHA article, I read about another study that had been conducted that showed that cooking at home did not necessarily lead to health. But a study conducted at Rush University in Chicago found that the more time middle-aged women spent cooking at home, the more likely they were to suffer from metabolic syndrome, putting them at risk for heart disease, stroke and diabetes.

This is a portion of the full article written by Kim Krisberg found at: http://thenationshealth.aphapublications.org/

Regardless of whether a person is trying to lose weight, cooking at home often results in a healthier diet, according to new research published in the Public Health Nutrition journal in November.

When compared to white survey respondents, black respondents were more likely to live in households where dinner is cooked with low or medium frequency. The study acknowledged that work and time constraints may pose a significant barrier to cooking at home, especially for low-income families. In turn, healthy eating efforts should consider ways to help people navigate the retail food environment in healthier ways.

Author Michael Pollan called home cooking the "single most important thing we could do as a family to improve our health and general well-being" in his 2013 book Cooked. And Michelle Obama told a crowd at the 2014 Building a Healthier Future Summit that "research clearly shows that home cooking is one of the single most impactful ways for families to improve their health."

But a recent study from researchers at Rush University in Chicago finds that the more time middle-aged women spent cooking at home, the more likely they were to suffer from metabolic syndrome, putting them at risk for heart disease and diabetes.

"We often emphasize cooking in our health interventions, but we hadn't seen a lot of conclusive evidence," says Bradley Appelhans, associate professor of preventive medicine at Rush University Medical Center and lead author of the study.

For the study, published in December in the journal Preventive Medicine, Appelhans and his co-authors analyzed data from the Study of Women's Health Across the Nation, or SWAN. This ongoing research endeavor collects data on the health of more than 2,000 women of different backgrounds from the age of 42 to 52 over the past 15 years. They're given a yearly health exam that includes a questionnaire about their habits. "In most households, women are the primary food preparer, so it's a logical group to study," says Appelhans.

For the study they tapped the SWAN data to see how cooking related to markers for metabolic syndrome — things like glucose levels, abdominal obesity, triglycerides, low HDL cholesterol (the good cholesterol) and hypertension. Having at least three of these markers qualifies a person as having metabolic syndrome. They also controlled for factors like employment status and menopausal status.

The results showed that the odds of having metabolic syndrome increased as the women aged, but the increase was faster among those who said they spent more time preparing meals. Interestingly, when they looked at the specific metabolic syndrome markers, meal preparation and cleanup time were associated with all of them except abdominal obesity.

One reason why cooking at home might be linked to disease in middle-aged women? Appelhans says that lots of baked treats — think brownies, cakes, pies — could "be lumped in there" with the cooking.

While the results are intriguing, they have limits. The data on cooking for SWAN hinge on that single self-reported question. And that question gleans nothing about what they cooked. One "possibility is that women who were at the highest risk for heart disease and diabetes were more motivated to cook meals at home," says Appelhans.

Appelhans notes there are many avenues of further study that could refine how we understand cooking as a health intervention. At midlife many people already have developed health problems — 23.4 percent of women in the SWAN cohort already had metabolic syndrome. "Women in midlife already have many patterns stable by this age," he says. "It would be quite interesting to follow individuals prospectively from early adulthood and see how meal preparation and cardiometabolic risk change together over their life."

While many cooking crusaders blame manufacturers of high-sugar, high-fat, high-salt packaged food for American's ill health, Appelhans says it's more complex than that. "Another thing to think about is many [prepared] foods have gotten much healthier — they've cut down on sodium, calorie content and created tasty alternatives to fast food and home-prepared meals," Appelhans says.

In another study at Rush, Appelhans and his team are looking at how different food sources from cooking at home to convenience stores contribute to health.

In the end Appelhans cautions that the take-home message for this paper isn't that cooking is bad, but that, "We need to ask more complicated questions about home food preparation and be cautious with simple public health messages like 'just cook more.' " The study conclusion says "public health interventions should place greater emphasis on cooking healthfully, not just cooking frequently."