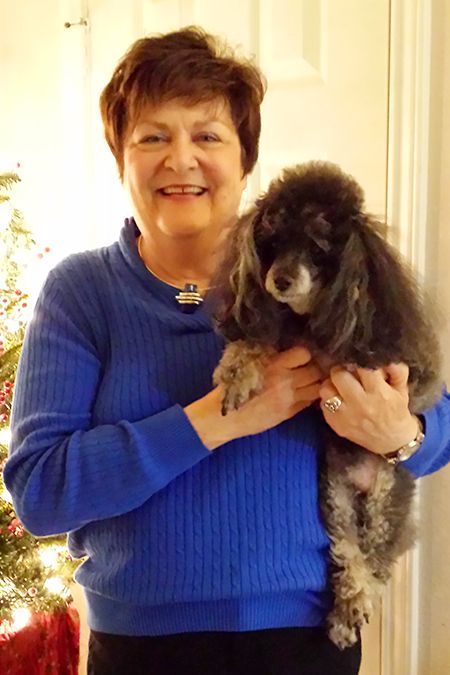 Recently, I sat down with Janet, who participated in The Happy Kitchen/La Cocina Alegre’s® 6-week series of cooking and nutrition classes for cancer survivors in the spring of 2012. One of the first things she said to me, in her warm Louisiana drawl, is that she feels weird about having the spotlight on her because she feels that she’s not perfect example of weight loss. But this series of stories is not about perfect people, it’s about real people and their real experiences, both good and difficult. This series is about folks reading a story and knowing that someone else has been through what they might be going through.

Janet was raised on the Mississippi Gulf Coast, about an hour outside of New Orleans, and worked as a marching band director for a middle school just outside of New Orleans for 34 years. She retired in 2005, just months before Hurricane Katrine hit Louisiana. After the levee broke, the flood caused an oil container to spill, meaning that in addition to water damage reaching above the gutters, there was an extra layer of muck covering the house. Janet made the difficult decision to have FEMA demolish the house and start over, inland, in Austin. “The only thing I knew about Austin, Texas was one, that it was the capital and two, that the [New Orleans] Saints had drafted Ricky Williams.”

A few years after settling in in Austin, there was another hurdle: she was diagnosed with breast cancer. Between the chemotherapy and the stress, Janet started gaining weight, “It got to a point where I didn’t like myself, I was hurting, I was uncomfortable… Nobody wants to live like that.” After her treatments were over she decided that it was time to take her health back, and a part of that was getting to a healthier weight. In Janet’s case, she wasn’t alone; in her toolbox she had her oncologist, a support group that includes her church and her co-workers at Mary Kay where she is a consultant, joining a weight loss program (Weight Watchers) and a Livestrong-sponsored The Happy Kitchen/La Cocina Alegre® six-week series.

Although she had grown up learning how to cook from her mother and had taken Home Economics in High School, she had never taken a cooking or nutrition class before. Part of the appeal of the classes was that they were free, “Livestrong offered it and I figured, [I can] learn healthier eating.” Plus, there was the cancer, “Well, I have this disease now, I might as well figure out what’s… a healthier way of life. I didn’t think that I was bad, but, whew, I didn’t know!” She thought that the classes were helpful because they made her taste things that she hadn’t thought about tasting before, “some things I didn’t like, and some things I just fell in love with.”

At first, she balked at the thought of trying collard greens, “[the instructor] was demoing collard greens and I’m thinking of my mother cooking them and they were nasty. And I’m like, ‘I don’t think I want this stuff’ and I’m not saying this out loud, but I must have projected it because she turned around and she said, ‘and this is not like you mama’s [collards]!’” She learned that adding a little bit of turbinado sugar can take away some of the bitterness common in collards. She also learned tips about properly cleaning her produce, which is important because her immune system is not at full strength.

Since 2012, Janet came back to SFC and joined us for a Winter Harvest class in December of 2014. She is currently in remission and focused on keeping her weight healthy. About the series she says, “It’s been an experience, but it’s been fun!” Ever the teacher, since taking the series Janet regularly shares what she’s learned with her friends. She feels that by sharing food and what you’ve learned with other people - and trying dishes that other people bring - builds community. I asked her what she would say to someone who was trying to make a healthy change in their life but was struggling. “Have an open mind. Don’t just say, ‘I don’t like that.’ You know, just like the collard greens… Or even if you don’t love it, you can tolerate it and it’s good for you and you’ll learn. Just be open… What’s the worst that can happen?”