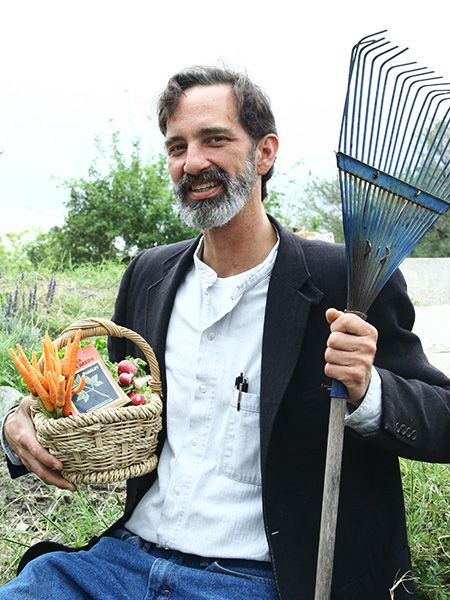 It’s All About the Okra - SFC Deputy Director Staff Profile

As the focus of SFC Deputy Director Andrew Smiley shifts to more direct involvement in Farm Direct programming, including SFC Farmers’ Markets, we thought it timely to ask a little about his background and interests, and why he wanted to work more closely on this aspect of SFC programming. Andrew says, “It’s all about the okra.” So, here’s a little more detail on the topic, in Andrew’s own words:

My parents always a raised a big garden during my childhood in Baton Rouge. So, too, did nearly everyone else in my family. I was expected to help out, and I generally didn’t mind. But, I do recall pushing through the scratchy leaves on plants that had grown high overhead to harvest those little, slimy green pods, and how that truly felt a little like a harsh and undeserved punishment.

I lost that garden time when I moved away for college and then came back to finish at LSU. My aim after completing a political science degree in 1993 was to work on environmental justice issues. Through that work I was introduced to a few organic farmers from South Louisiana. As I got to know them and their industry, I began to recognize those small family farmers as the real environmentalists – the authentic stewards of our land, air, and water. I also appreciated that they were building economically viable businesses and preserving the culture of my birthplace. Okra was produced in great volume, and so it became for me a sort of symbol of economic, cultural, and environmental sustainability.

I continued working with a few of the farmers, sometimes in the fields and sometimes helping to sell their products to retail stores and restaurants (including my own, which lasted for a year or so). The founding of the Baton Rouge Economic and Agricultural Development Alliance (BREADA, now the “Big River” alliance, http://breada.org/) in 1996 and its Red Stick Farmers Market provided me a focused volunteer opportunity, which quickly turned into a paid position and ultimately the director position, running markets and helping farmers sell more okra than ever.

Following the launch of BREADA’s public market in 2003, I left Baton Rouge to explore an opportunity in Austin. But I maintained a connection with agriculture as a project coordinator with the Southern Sustainable Agriculture Working Group http://www.ssawg.org/ and as a volunteer with SFC. As the business venture grew less viable, the SFC volunteer opportunity transformed into a staff position. I started working with SFC in 2005, with a focus on our farmers’ markets, which included development of our Food Stamp program, followed later by more intensive work on cafeteria sales, worksite pre-order sales, and farm-to-school efforts. As Deputy Director, my role expanded to more administrative oversight and broader focus on all our programs. Recently I became interested in realigning my focus to SFC’s Farm Direct department, to take on some of Market Director Suzanne Santos’ duties following her retirement, and get back to farmers’ markets, back to direct market outlets, back to helping farmers sell okra.

Okra is still a strong symbol for me that captures the spirit of sustainable and local food systems. And, of course, I will make a mean gumbo; I’ll cut it and freeze it for winter; I’ll splurge on breaded and fried occasionally; and, I treat myself to stewed with tomatoes when I have the time. When I think about my commitment to this work, I think, “It’s all about the okra.”

One of my favorite ways to prepare okra these days is grilled. Preparation is easy: toss the pods whole with a little olive oil, salt, and pepper, then thread them onto a skewer. Cook over hot coals until grill marks appear on one side, about 6 minutes or so, then turn and cook a couple minutes on the other side, until they’re tender. I encourage others to share their favorite okra recipes in the comments section below. And, of course, I encourage everyone to visit your SFC Farmers’ Markets and buy lots and lots of okra!