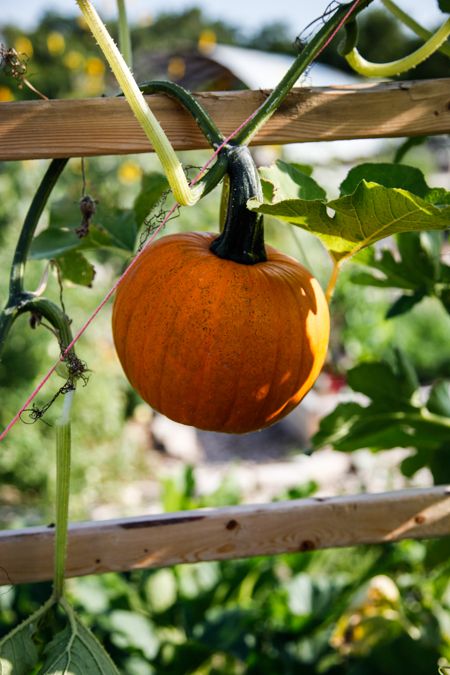 Time to Plant Pumpkins for a Fall Harvest

In the U.S., pumpkins are a beloved fall and winter staple. Native to Central and South America, pumpkins are a key ingredient for traditional Thanksgiving dishes such as pies, soups, and breads. They are also widely used to carve jack-o’lanterns for Halloween, a tradition that originated in Ireland, where locals carved jack-o’lanterns out of turnips and potatoes.

In Central Texas, pumpkin patches are typically planted in early summer, as they require warm soils to germinate. Although June is prime planting time, pumpkin patches require advance planning because of the way they grow. Before you plant your seeds, make sure you know what kind of pumpkins you want to harvest. Do you want to use them to carve or decorate, eat, or both? Varieties that are best for carving are Dill’s Atlantic Giant, Big Max, Mammoth Gold and Lumina. Jack-B-Little is a smaller variety that is very good for decorating. For roasting or making a pie, Small Sugar is a good choice. Jackpot and Spirit Hybrid are good multi-purpose varieties that can be both carved and eaten. Of course, any of the varieties could be eaten, but with the tradition of Halloween, the pumpkins that are bred for carving pumpkins often lack the flavor of some of the smaller varieties that are better-suited for eating.

Pumpkins are members of the gourd family, which includes cucumbers, melons, cantaloupe, watermelons, and zucchini. What do these vegetables have in common? They grow on vines and need plenty of space! Pumpkins can easily take over your entire garden patch before you know it. Generally, you will need 10 ft. by 20 ft. for several pumpkin plants, but you can also plant these to grow around the base of other crops, such as corn. Alternatively, plant pumpkins around the perimeter of your garden or build a sturdy shade structure from bamboo for pumpkin vines to grown on. Just make sure to place your trellis on the north or west sides of your beds so as not to shade out other parts of your garden.

Pumpkins require at least eight hours of direct sun each day, so choose a sunny spot in your garden accordingly. Plant your pumpkin seeds in mounds and place four to five seeds in each hole, one to one and a half inches deep, spacing the mounds about four to six feet apart. Add a thin layer of compost to the top of the soil. Once the seeds germinate – usually in a week – wait seven to ten days and then carefully thin the seedlings with scissors, leaving only the strongest two plants. Don’t pull the seedlings out by hand so as not to damage the roots of the remaining plants! After thinning the plants, add a layer of organic mulch to conserve water and suppress weeds.

Although pumpkins are fairly hardy and drought tolerant, water them deeply a few times a week. Manage your pumpkin patch by looking out for any pests and diseases. Common pests and diseases for pumpkins include squash bugs, vine borers, aphids, cucumber beetles, powdery mildew, and downy mildew, but these can be managed using organic techniques – remove the bug casings by hand or try spraying the pumpkins with citrus oils or compost teas. Downy mildew can be prevented by watering directly onto the soil and not wetting the leaves.

Generally, pumpkins take 90-120 days to mature after seeds are planted, depending on the variety. Pumpkins are ripe when they are fully colored and have a hard rind and woody stem. Carefully cut off the stem with a knife, leaving several inches of stem on the pumpkin. Some pumpkins might fall off of the vine when they are ready to be harvested. Pumpkins can be stored for a long time in a cool, dark storage area and can be used for all your fun fall activities and delicious recipes long into the winter.

Once you harvest your pumpkin, don’t be shy to clean and roast the seeds to make a great treat—recipe below! Of course, if the pumpkin was a particularly nice one, you may want to also save some of the seeds to plant next year. Gourds were originally prized for their seeds as a source of protein, just as or even more so than the flesh. As a child, I have fond memories of snacking on freshly baked pumpkin seeds after an evening of carving pumpkins for with friends and family.

While carving a pumpkin, scrape the seeds out with a spoon or your hand. Place seeds, which will be tangled in the stringy pumpkin flesh, in a colander and rinse with water. Remove any fleshy strings.

Spread seeds out in a single layer on the baking sheet. Depending on how many seeds you have, make sure they have enough room to roast and are not piled on top of each other.

Sprinkle a few pinches of your choice of spices over the seeds, along with a few pinches of salt. Place in oven and roast for 20 minutes, or until seeds brown, but be careful not to burn them.

Remove the seeds from the oven and let them cool down on the baking sheet. They will get crispier as they cool.