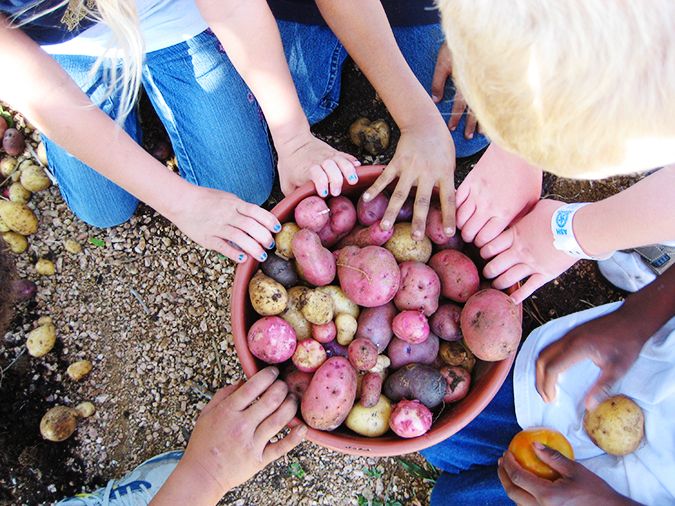 The potato is a relatively underappreciated as a vegetable – seemingly bland, associated with one of the largest famines in history, and not usually seen in high-end culinary cuisine. However, Americans consume about 140 pounds of potatoes every year, and the potato is the world’s fourth largest food crop – making it quite popular! The Grow Local team researched some interesting facts about the potato and its beginnings in the Andes Mountains and how the potato become one of the most popular food crops to date. First, read up on how to properly plant potatoes using a potato bought from your local organic grocery store, and then follow potatoes throughout history and learn about their fascinating rise to popularity.

How to Plant Potatoes

The Incas of ancient Peru were the first to cultivate potatoes more than 7,000 years ago. Potatoes are exceptionally well-adapted to being grown in the high altitudes of the Andes, and the Incas utilized the potatoes for many different and unique uses.

Because the potato tubers travel well, were cheap, and prevent scurvy (because of their Vitamin C levels), they were brought to Europe in the 16th century as food for sailors that were exploring the New World. It spread throughout Europe during the following centuries, and eventually became a staple food for the people of Ireland. The tuber was a safeguard against crop failure and starvation and was widely grown in the country, until the 1840s when a major outbreak of potato blight struck potato fields. After multiple waves of the fungus killing off potato plants, more than 90% of the potato crop had been annihilated. Famine set in and diseases spread during this time, and the people of Ireland began their immigration to the United States – over one million died from starvation or disease and another one million people emigrated from Ireland during the Irish Potato Famine.

The Accidental Creation of French Fries and the Potato Chip

The potato was shunned by the aristocracy of Europe and was regarded as a food for the poor as a defense against famine. However, a chef for King Louis Phillippe accidentally created the famous pommes soufflées (puffed potatoes) when he plunged fried potatoes into extremely hot oil to reheat them when the king was late for dinner. The food item was quickly brought to French street food vendors and increased the popularity of the potato in Europe. Soon after and across the ocean in New York, a chef named George Crum was employed at an elegant resort restaurant and tended to a crabby customer who complained that the French fries were served too thick. Crum decided to get his revenge by slicing the potatoes too thin for even a fork to skewer. Of course the plan backfired, and the guest fell in love with the paper-thin potato chips that were created. The world is now infatuated with both the potato chip and French fries, and the United States is the fourth largest grower of the potato.

Other Fun Facts about Potatoes