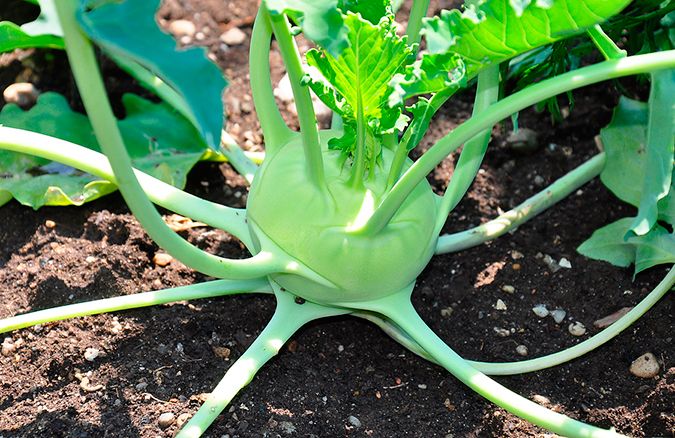 Kohlrabi catches the eye with its whimsical shape – octopus-like stems and leaves extending from a hardy, round stem. White and purple varieties exist, with hues of pale green and violet. Its unique name comes from the German word meaning “cabbage turnip,” and it is often called a German turnip. It is a member of the Brassica family, which includes cabbage, broccoli, cauliflower, kale, collard greens, and Brussels sprouts. This stem vegetable is native to Europe and was introduced into the U.S. by the early 1800’s, but it is now grown in many areas with temperate climates both for its stem and greens. Kohlrabi has a similar taste and texture as that of a broccoli stem or the most tender part of a cabbage core but is much milder and sweeter. The smaller, younger stems have an even juicier, nutty flavor.

Kohlrabi is highly regarded not only for its flavor but also its nutritional value. It is rich in vitamins C, A, and K; minerals like calcium, potassium, and iron; and phytochemicals that protect against certain cancers. Kohlrabi greens are also nutritious, containing carotenes, vitamins, and minerals. Like other Brassicas, both the stem and greens are rich in dietary fiber that aids digestive health.

Kohlrabi is a perennial, cool season vegetable, mostly grown as an annual for its edible stem. You should plant kohlrabi in the spring, sowing seeds four to six weeks before the average frost, which is typically mid-January to late February in Central Texas. Kohlrabi prefers loose, well-drained fertile soil and six to eight hours of sun. Plant several seeds ¼ inch deep, spaced at least five inches apart. Later, thin plants when they are four inches tall,, and leave eight to ten inches between seedlings as crowding can invite mildew. Water and weed plants, adding a layer of mulch, but take extra care around the delicate, shallow roots. Unlike most root vegetables, the bulb grows on top of the ground, with the roots closely attached to the earth beneath it. Common pests include the cabbage worm and cabbage loopers, which can be mitigated by adding row covers and hand-picking both the caterpillars and eggs from the undersides of leaves.

The round, edible stem is ready for harvest 55-60 days after sowing. Harvest “bulbs” when they are two to three inches in diameter, cutting the bulb one inch below the stem.

Remove the leaf stems and leaves and clean well. The leaves can be sautéed or steamed. Smaller kohlrabi has edible tender skin but larger kohlrabi greater than three inches in diameter should be peeled to remove the tough outer layers, which have a woody flavor. Store in the refrigerator for up to several weeks. Kohlrabi is a versatile vegetable and its mild flavor means it can be prepared multiple ways; stir-fry, roast, boil and mash, pickle, or julienne to use raw in a salad.

My favorite way to eat kohlrabi makes for a great snack. Because of the Mexican influence on food culture here in Central Texas, I call this recipe, Kohlrabi a la Mexicana. I remember when I first prepared kohlrabi this way—it was December and I was on my way to Big Bend with my family to spend the holidays. I was preparing foods we could eat in the car on the long journey there, and this kohlrabi hit the spot!

Squeeze lime juice over kohlrabi. Sprinkle with chili and salt to taste.