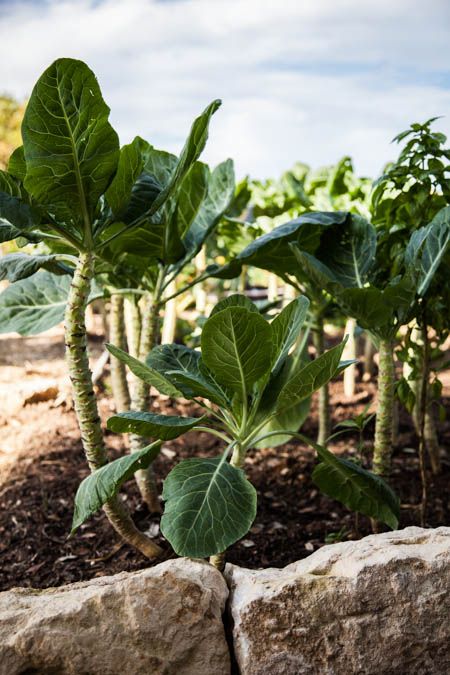 Despite its sunny disposition, Central Texas has short growing seasons. The region straddles multiple climate zones and has few forests, no natural lakes, and only small rivers to modulate temperatures. Summers are hot and long, and as late as mid-September, temperatures can soar above 100 degrees. Through late fall and winter, cold fronts sweep south off the Great Plains, causing sudden freezes.

In order to survive intense heat as well as frost, plants must be well established, but Central Texas’ extreme weather offers gardeners limited windows in which to successfully sow seeds and transplant seedlings. Seeds and seedlings planted too early in spring often succumb to late freezes, but if planted too late, they will not endure the summer heat. Similarly, many seeds and seedlings planted in late summer fail due to high temperatures, but if gardeners wait, they risk an early frost.

Fortunately, there are a number of ways to extend growing seasons. While it is unlikely that Central Texas residents will enjoy local tomatoes in January or local lettuce in July, by taking some of the steps listed below, you can ensure that your garden yields a steady harvest of vegetables despite the vagaries of Central Texas’ climate.

Good garden design can protect your plants from the heat and cold. If possible, locate your beds so that, during the summer, they receive shade from the west, when the sun is at its hottest. If there are stone or brick structures nearby, place your beds adjacent to them, on the southern side. During cold days, the structures will absorb heat from the sun. At night, they will radiate warmth, protecting plants from frost. Often, weather fronts are accompanied by heavy winds that can stress plants, stunting their root systems and reducing their ability to survive extreme weather. Reduce wind by building a wood fence or by planting a windbreak of trees and shrubs.

The healthier your soil is, the healthier your plants will be, enabling them to thrive despite the heat or cold. To build your soil, add compost at regular intervals, and avoid using pesticides and synthetic fertilizers, since these kill the microorganisms upon which healthy soil depends.

Different plant varieties are suited to different regions depending on their soil preferences and their tolerance for heat, cold, wind, and drought. Fortunately, Texas A&M Agrilife Extension has compiled a list (http://aggie-horticulture.tamu.edu/travis/wp-content/uploads/2012/11/VegetableVarietiesTravisCounty2013.pdf) of vegetable varieties suited to Travis County. Many of the plants listed have short growing seasons, meaning that they grow from seed to maturity in less time than other varieties of the same vegetable. They are therefore more likely to be fully established before temperatures soar or drop.

While many vegetable plants struggle with even a light frost, other vegetable plants thrive during extended cold spells and will produce throughout Central Texas’ relatively mild winters. They include spinach, lettuce, Swish chard, kale, beets, carrots, broccoli, brussel sprouts, cabbage, and peas. Planting these vegetables in late September and again at intervals over the next few months will ensure a steady supply of food through winter and into spring.

While frost can damage leaves, plants are most at risk when soil temperatures drop below a certain point. While heat stresses plants, it is often not heat but rather dehydration that kills vegetable gardens. Gardeners can mediate soil temperatures and reduce evaporation by covering the soil with a generous layer of organic matter. Leaves make the best mulch, but gardeners can also use straw, pine needles, soft wood, and compost that has not quite finished breaking down. To reduce the incidence of fungal infections, leave an inch or so of space between the mulch and plant stems.

Starting seeds indoors is an easy way to jumpstart your growing season. Seeds that cannot be sown outside until risk of frost has passed can be sown inside weeks – and even months – before the average last freeze. Similarly, many seeds will not sprout in the ground in early fall, when the soil is still warm and temperatures are high, but they will sprout indoors where it is cooler. Use a good seed growing medium (i.e. soil that is loose, fine-textured and well-drained) and ensure that seeds get at least 6-8 hours of sunlight each day. Avoid starting root vegetables and beans from seed as they do not transplant well. Seed trays can be placed in a greenhouse. They can also be placed in a cold frame, which is a simple, small glass structure that protects seeds and new plants from frost. If you do not have a greenhouse or cold frame, simply keep your seed trays in your house by a sunny window.