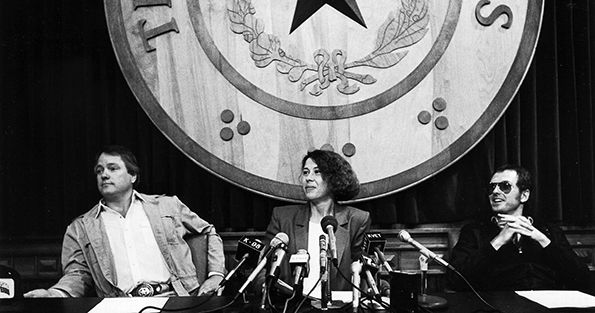 In Memory of Susan DeMarco

Last week America lost a populist leader and Austin lost one of our best neighbors and friends.

Susan DeMarco was born to an Italian-American family in New Jersey, where she taught in hardscrabble public schools before moving to Washington D.C. to pursue what would become her life’s work— fighting the powers that be on behalf of the powers that ought to be. Years later she’d joke that confiscating switchblades from her high school students was an easy introduction to dealing with politicians.

It was an exciting time to be a young policy wonk on the make. Rachel Carson’s Silent Spring (1962) and Ralph Nader’s Unsafe and Any Speed (1965) had kicked off the Consumer Rights Movement, which sought to protect Americans from the shortsighted (and sometimes downright criminal) collusion between corporate giants, and the public institutions tasked the protecting the nation’s air, food, economy, and safety. Before long, DeMarco was in the thick of it, researching federal agriculture policy for the Agribusiness Accountability Project, an outfit co-founded by a young Texan named Jim Hightower. The two took a shine to each other and began a partnership and life together that would last for the next 45 years. Their partnership was not only rooted in a deep personal devotion but an intellectual respect that produced some of the earliest and most articulate critiques of the America food system. After years of research, Hard Tomatoes, Hard Times (1972) and Eat Your Heart Out (1975) became founding texts in what more than a decade later would be called the “food movement.”

DeMarco and Hightower, however, weren’t cut out to be creatures of the Beltway. Hightower was itching to get back to his native Texas and DeMarco was ready for the next adventure. Throughout life, she took an impish glee in being with the rabble—especially when they were being roused—and that was just the plan when the young couple moved to Texas. Decades later, DeMarco confided to the Austin Chronicle, "I once made a Northeastener's mistake of describing Austin as 'a real good two-year town.’ It took me a long time to live that down." In any case, the people of Texas had different plans. Hightower was twice elected Commissioner of Agriculture on a progressive-populist platform, of which DeMarco was a principal architect. DeMarco possessed both a disarming intelligence and a preternatural ability to connect with people, whether they be ranchers from the Panhandle or small town newspapermen who were initially skeptical that the Jersey Girl (DeMarco may have been five feet tall in heels) understood the intricacies of crop insurance or consolidation in the poultry industry.

When Hightower began down the road of “recovering politician” in 1990, DeMarco was there each step of the way. The two traveled the world together helping friends from Bernie Sanders to union taxicab drivers fight for a better world. The two published their last book Swim Against the Current in 2008 and have since lent their voice to countless causes and campaigns.

DeMarco passed away peacefully on April 1 after a blissfully short period illness. She is survived by her partner Jim, and countless nieces, nephews and grand nieces and nephews.