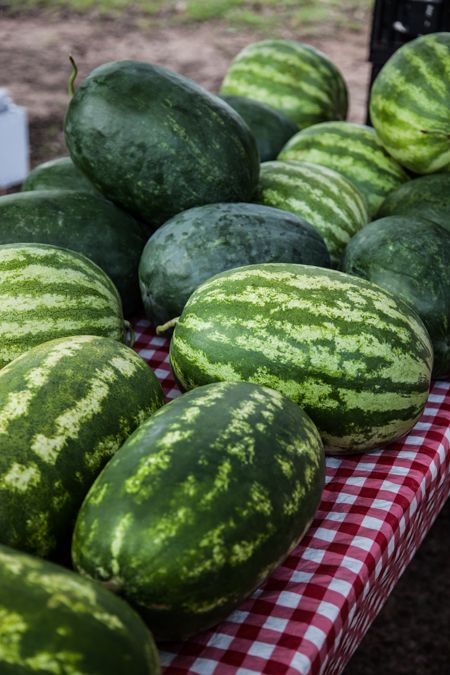 We love having sweet, ripe, refreshing watermelons as part of summer meals and celebrations, and we know we’re not alone. Texas is one of the largest producers of watermelon in the U.S. and has a long history of growing and eating watermelons. In Luling, Texas, the watermelon is so popular that the town celebrates with an annual four day festival called the Watermelon Thump, which includes fun activities such as seed spitting, watermelon eating, and a contest for the largest Black Diamond watermelon grown.

Here in Central Texas, there are several recommended varieties to grow, planted in the spring for a summer harvest:

Since now is the time to harvest some of those watermelons, here are a few simple steps. Turn the melon over and check out the spot where the melon was laying. If that portion of the watermelon is a pale yellow color, the melon should be ripe. Look at the tendrils (short, curly, stem-like vine) next to the melon, close to the area where a leaf is attached to the main vine. When the first tendril next to the fruit looks dead and dried up, the melon closest to that tendril should be ripe. The ripe watermelons sometimes also have a matte sheen, while the immature watermelons will be shinier.

Watermelon “thumping” is another common practice, which involves knocking quickly and sharply with a finger or two a few times in a row. If the watermelon sounds hollow and not high pitched, it is likely to be ripe. A thud or less distinct sound indicates it may not be quite ready. Be sure to practice your thumping skills to form a tuned ear.

Whether you harvest your own watermelon or find it at one of SFC’s Farmers’ Markets, we hope your summer is made sweeter with a few juicy bites!