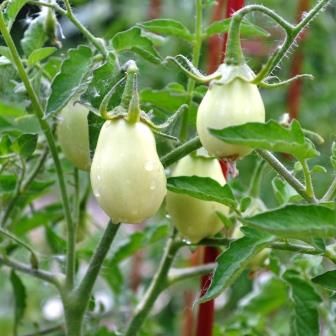 The Tomato: The Comeback Kid

Tomatoes are the quintessential springtime veggie to plant in our gardens. Thousands of varieties exist in just about every size, shape, and color of the rainbow, and gardeners have been growing heirloom tomatoes for hundreds of years that boast tantalizing flavors. However, despite its current popularity among gardeners and hotdog and cheeseburger lovers alike (don’t forget ketchup!), the tomato hasn’t always been a well-liked or well-trusted crop.

The tomato originates from the South American Andes – a fact that is mind-boggling to those who cannot imagine Italian cuisine without the sweet taste of tomato sauce. The Peruvian Aztecs called the tomato “xitomatl” which means “plump thing with a navel,” while the Nahuas of Mexico called it “tomatl” (where the word “tomato” originates from) which means “the swelling fruit.” Tomatoes actually increase in weight even after being harvested, which is probably why the Nahuas named it so. Finally, the scientific name Lycopersicon lycopersicum means “wolf peach” – a pretty intimidating name in our opinion.

When Europeans came to the New World and found tomatoes growing, they were very suspicious of the plant because they assumed it was poisonous like some of its relatives in the deadly nightshade family. (The native tomato was small, similar to our cherry tomatoes today, and most likely yellow rather than red.) They were somewhat correct in their hesitations, as tomato leaves and stems contain atropine and other topane compounds that are toxic if ingested. However, the fruit itself is the richest source of lycopene in our diet – a beneficial compound in fighting cancers and neurodegenerative diseases. The suspicion surrounding the tomato’s poisonous nature hindered the widespread cultivation of the plant until much later.

Also, the tomato has been incorrectly identified as a vegetable for hundreds of years. Botanically speaking, the tomato is most definitely a fruit. The reason that it has been grouped with vegetables is because the government classified it as a vegetable in the 1800s so it could be taxed under custom regulations. It is also prepared as a vegetable more often than a fruit in the culinary world, which could add to the confusion.

Fast forward to the present: The U.S. now produces more than 13 million metric tonnes of tomatoes every year, third in global production after China (50 million tonnes) and India (17.5 million tonnes). Ketchup is consumed at alarming rates, salsa is a staple for many of us in Texas, and tomato plants have even been grown in space! Quite a the comeback kid in our opinion!

How to Plant Tomatoes

If you’re interested in learning firsthand, and expanding your knowledge on what to grow in the summer in Central Texas, we hope that you’ll join us for one of our classes, which run throughout the year, and focus on a variety of topics.