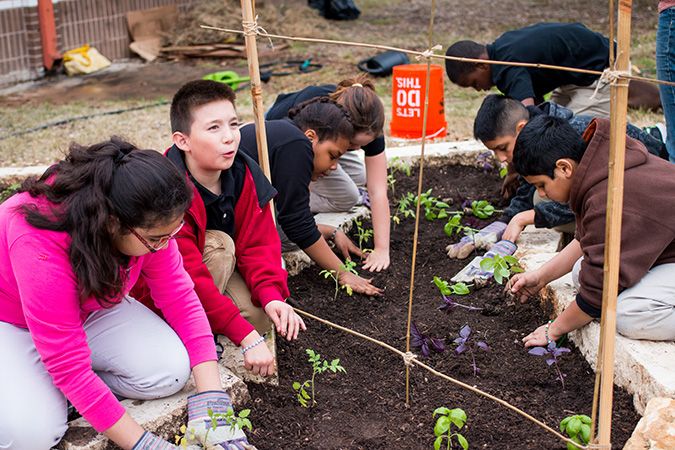 Schools are transient places. Students graduate, taking active parents with them. Teachers and staff also move on to different schools or careers. As folks come and go, so too does gardening knowledge and enthusiasm, and once thriving gardens can rapidly turn into beds of Bermuda grass interspersed with lone, misshapen carrots or a single, sprawling plant of rosemary or sage.

Fortunately, with a bit of team work abandoned gardens can be easily revived. Recently, Grow Local along with members of SFC’s community outreach team collaborated with teachers, parents and staff at Norman Elementary to redesign and restore the school’s garden. The existing planting beds were too wide for students to garden, and the paths were too narrow for students to gather during gardening demonstrations. Perhaps most daunting, thick patches of Bermuda grass were growing in each bed.

After a series of meetings with Carissa Raney, the school’s Parent Support Specialist, SFC and Norman Elementary chose a date for a work-day, spread the word amongst school staff and parents as well as SFC volunteers, and assembled tools. On the day of, over 20 people hauled away limestone blocks, weeded the garden beds and paths, and re-laid the limestone, creating three new planting beds separated by wide paths. Teenagers playing basketball on the school’s court took a four-hour break from their game to help us dig, weed, and lay woodchips. We ended the day by planting one bed with sage, thyme, oregano, dill, and fennel donated to SFC by Akins High School.

Before the day began, we were slightly worried that we had bitten off more than we could chew, but thanks to the efforts of gardeners who came before us, our labors were not as strenuous as expected. Our shovels cut easily into soil that had been amended and worked, making it easy to uproot weeds and move limestone, and the soil required minimal additions of compost before planting. When the day ended, we were tired and hungry, but we had accomplished our goal. Norman Elementary now had three usable vegetable garden beds, just in time for spring planting.

Because previous gardeners had moved on from the school, in order to ensure the garden’s success, we followed the work-day with a series of adult and youth gardening classes. In addition to teaching students and staff how to plant, we added trellises to the garden, built a simple compost system out of chicken wire and rebar, and did a general tidy up. While technically SFC’s work at Norman is nearly done, we hope this is the beginning of a long gardening relationship.

If you are involved with a Central Texas school, as a staff, teacher, parent or neighbor, and if you think your school garden would benefit from a similar revival, let us know! Contact Bianca at Bianca@sustainablefoodcenter.org or (512) 236-0074 ext. 121. We would love to work with you!