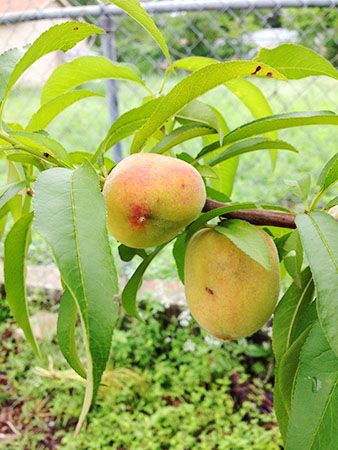 One element of United States food heritage that largely slipped out of public awareness but in recent years is being celebrated once again is the cornucopia of fruit tree varieties that were developed and cultivated in this country. As with other types of produce, the fruit varieties we now find at grocery stores are prized for characteristics like a long shelf life, uniformity, and durability rather than flavor or nutritional content. The few familiar faces we know--Granny Smith, Gala, and Red Delicious, for example--meet these criteria, but they are only the tip of the iceberg. Dozens of other varieties with a wide array of colors, shapes, and flavors were once cultivated and consumed. As the local food movement has strengthened local fruit retail outlets, such as farmers’ markets and pick-your-own farms, the opportunity to feature and sell varieties that have stellar flavor (but that may not stand up to long refrigerated truck rides) has reemerged.

The celebration of the Newtown Pippin is an inspiring example of this new wave of enthusiasm for lesser-known fruit varieties. This tart and sweet green apple was developed and cultivated in New England in the era of Thomas Jefferson, who grew it himself at Monticello and called it superior. The variety had been nearly forgotten when journalist Erik Baard learned about it by chance. His imagination captured, he spearheaded a project to bring it back into production and to make it the official apple of New York City. A collaborative of nonprofit organizations and businesses propagated Newtown Pippin trees from those remaining in antique orchards and made saplings available to plant at community gardens, school gardens, and other public spaces.

Are you inspired to plant a lesser-known fruit tree cultivar yourself? An enticing variety of fruit trees thrive in our Central Texas climate, including apples, pears, peaches, plums, pomegranates, persimmons, figs, kumquats, and satsumas. A few cultivars appropriate for our region are: