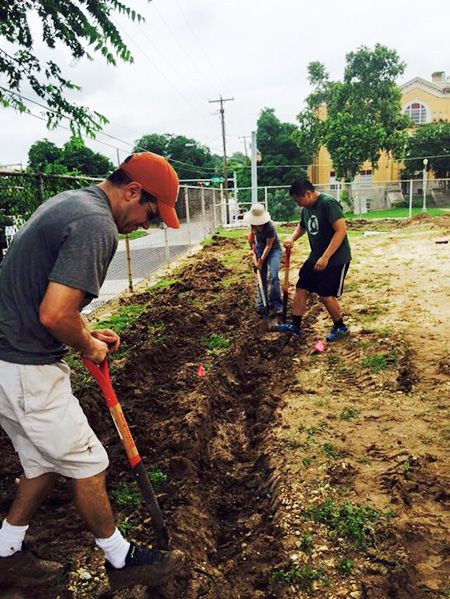 This past June, parents and community members joined forces with Pease Adventures in Wildlife Sciences (PAWS) to construct a rain garden at Pease Elementary School. A collaborative effort between the school and community supporters, PAWS (http://www.peasepta.org/paws/) works to transform the school’s campus into a center for scientific learning and social responsibility. As part of its efforts, the group decided to build an outdoor science lab and native gardens in an under-utilized area of campus.

Participants realized, however, that the site had drainage problems. Storm water from the main school building empties through a narrow storm pipe onto the site and tends to flood the area, causing erosion. During heavy rains, water spills over the school’s retaining wall onto the city sidewalk. From there, the unfiltered water flows into the storm drains to Shoal Creek.

In an effort to reduce flooding, erosion and polluted runoff, PAWS decided to turn a drainage problem into a learning tool by constructing a rain garden that would capture and clean storm water, provide habitat for local wildlife, and benefit students by offering them an opportunity to study the region’s flora and fauna. The group discussed the idea with Pease’s principal and with the director of AISD’s Plant Improvements department. After administrators approved the project, PAWS raised funds within the school community. The group also received a Bright Green Futures grant as well as in-kind donations from local businesses through its Proud Pease Partners program.

TBG, a local landscaping firm, worked with PAWS to draft a concept site plan. A number of Pease parents who work as architects and engineers also volunteered their time and expertise to develop and certify the project. Planners decided to locate the rain garden next to the school’s “Innovative Vertical Food Garden,” an element of the outdoor science lab that will be student-inspired and student-built. An aqueduct will connect the Student Experiment Station, located uphill, to the food and rain gardens. When students engage in water experimentation with the cisterns and aqueduct, water will flow downhill to the gardens, ensuring that no water is wasted and reducing the amount of maintenance the rain garden requires.

Construction on the rain garden began this past June. With leadership from Chris Randazzo, a Pease parent and a civil engineer, PAWS held four weekend workdays. Over the course of the month, around 30 parents and community members worked together to construct swales, install a French drain system, and build the rain garden’s foundation. All that remains is to lay landscape fabric and topsoil.

PAWS will complete the garden when school starts up in August and will work with teachers to plant the garden in September, after the weather cools. Participants will plant native Texas coastal grasses, horsehair plants, and other flood and drought tolerant natives. The garden will replicate a Texas Coastal Plains ecosystem and will form part of the school’s Regional Climate Gardens area, which showcases Texas’ diverse climates and ecologies.

Louisa Brinsmade, a member of PAWS who has led efforts to install Pease’s rain garden, has the following advice for teachers, parents and community members who would like to build a rain garden at their school: “Parents, community groups, private businesses, and even government entities are ready and willing to help with your big ideas and grand plans. Find your core group of parents and enlist them to do outreach and to secure financial assistance and community expertise. You will be amazed at how much support is out there.”