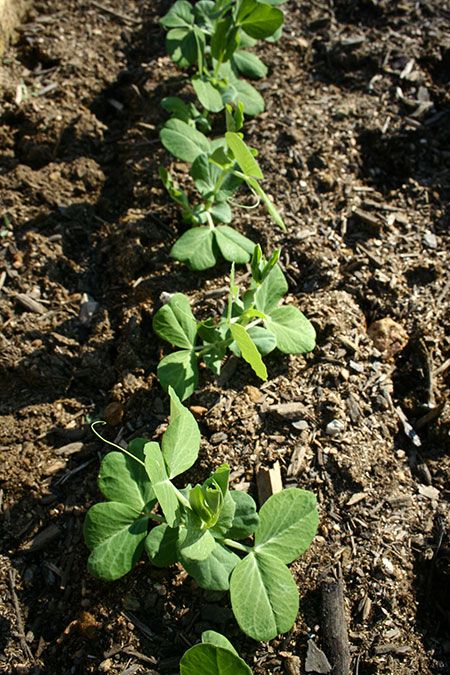 From Mendel to Mushy Peas

To some, peas are a reminder of Gregor Mendel, father of modern genetics, who used pea plants for his breeding experiments. To others, fresh green peas simply bring a pop of color to dishes that reassures us spring is near. The world's first sweet tasting pea was developed in the 18th century by amateur plant breeder Thomas Edward Knight of Downton, near Salisbury, England, after which peas gained increasing popularity. Modern garden pea varieties trace back to Knight's selection, which explains why garden peas were known worldwide as "English peas" until the early half of the 20th century. The U.K. even boasts a pea etiquette. Much of the population spears or shovels peas, but the proper way is to squash them on the back of your fork – also known as mushy peas!

Sow peas in spring, about one month before your last frost date, as peas produce poorly in hot weather. In climates with mild winters, a second crop can be sown in late summer for harvesting in late fall. Early peas in particular like raised beds or a sandy loam soil that warms up quickly. Heavier soils can provide cooler conditions for a late pea crop, but you'll need to loosen the ground before planting by working in some organic matter. Give peas a sunny spot protected from high winds. To make good use of garden space, interplant peas with radishes, spinach, lettuce, early greens. Carrots, in particular, are a favorite planting companion, hence the “peas and carrots” love affair.

Prepare a wide planting bed by loosening the soil to at least 10 inches deep while mixing in compost. Plant seeds in a double row, with a row of seeds on each side of the trellis. Poke seeds into the prepared site 2 inches apart and 1 inch deep. Thinning is not necessary. All peas benefit from a trellis or other support. Install a 6-foot-tall trellis before planting long-vined varieties. Compact varieties can also be staked with woody branches or cages after they sprout.

Providing peas with just the right amount of water can be tricky. They should never be water logged. On the other hand, don't let the soil dry out when peas are germinating or blooming or when pods are swelling. Once the plants are up, they only need about 1/2" water every week until they start to bloom; then, increase their water to 1" a week until the pods fill out.

To avoid mangling the vines, use two hands to harvest peas. When green peas are ripe, harvest them daily, preferably in the morning. Pick snow peas when the pods reach full size and the peas inside are just beginning to swell. For best flavor and yields, allow snap peas to change from flat to plump before picking them. Gather sweet green shell peas when the pods begin to show a waxy sheen, but before their color fades. Be sure to refrigerate peas to stop the conversion of sugar to starches and maintain crispness, ready to be used fresh or cooked in a variety of recipes.

Heat oil in a large skillet.

Remove ginger and garlic from the pan and set aside until later.

Add cabbage and carrots to the pan and sauté until tender.

Add peas and cook until soft (about 2 minutes).

Remove vegetables from the pan.

Put the cooked rice into the pan and stir until heated through. If the rice is sticking to the pan too much, add oil.

Make a hole in the middle of the rice and add the eggs.

Stir eggs until they are well cooked.

Toss vegetables, ginger, garlic, green onions and jalapeño with the rice and eggs.

Heat for one more minute.