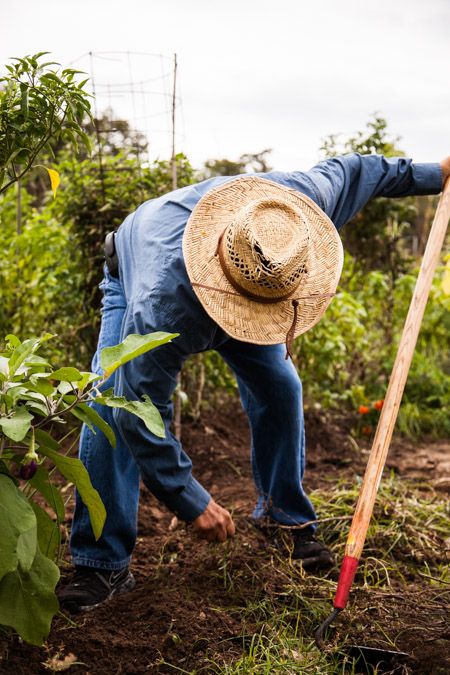 Finding New Life in the Garden

Julio Perez wears a kerchief tied around his head and a wide, welcoming smile. Almost any time of day, you'll find him weeding or planting at Festival Beach Community Garden, and if you meet him there, he might tell you about the strange gourd growing along the fence (“It’s a loofah. You can eat them when they’re small and tender, and when they’re big, you can make them into scrubbers”), or how to get involved with the garden (“Talk to Alexandra, she’ll get you on the list, or you can help me in the Communal Plot anytime!”). Julio’s dedication to this community garden has to do with its location in the heart of his childhood home, Central East Austin, but his connection also goes much deeper.

Originally from Monterrey, Mexico, Julio worked as a child with his family on peanut and dairy farms in West Texas before moving to Austin. His family lived on Castro Street, near Martin Middle School, for much of his childhood. Even after his family moved to South Austin when he was in middle school, Julio and his siblings would ride the bus back to their old neighborhood to hang out with friends. “I keep coming back to East Austin,” Julio says. He says this part of town feels like home.

Then, several years ago, Julio was diagnosed with a terminal illness. His life stopped—he had to completely change his pace and his direction. He found himself weak and in poor health, with an array of medical issues, and he experienced bouts of depression. He got involved with Festival Beach Community Garden by accident. “I’m involved with an organization,” Julio explains. “I have a team of folks who keep an eye on me, who help me if I need anything. Someone on my team lived by Festival Beach, and I told her and her husband they should try it out.” They did, but they grew frustrated at their lack of success. “They were going to give up their plot, but I told them, ‘Don’t give it up, let me help you.’ ” Julio drew from his lifelong gardening experience and showed his friends how to use the right tools and how to weed properly. They completely cleaned out the garden together and got it organized. It helped, Julio says: “They were like, “Oh my god, we do have a garden!”

After this, Julio was hooked. He got his own plot at Festival Beach and started attending the meetings. “The garden really helped with my mental health, and also my physical health. Since I’ve been here, I’ve actually become stronger. I take a while in the morning to get started, but once I’m here, that’s it. My muscles are warmed up, and my joints are warmed up.”

Julio quickly got more and more involved at the garden. “Why be down, at home, depressed, when I can be out here, doing something positive, something that I enjoy?” These days, he is Site Manager of the garden, and he also heads up the team that manages Festival Beach’s sizeable Communal Plot, which grows fresh veggies for the food pantry at the Rebekah Baines Johnson (RBJ) Center, an independent living center for low-income seniors and people with disabilities. Julio and his team grow, harvest, and wash produce from the garden, so that it is easier for RBJ residents to use it. Gardeners also sell food harvested from the Communal Plot to raise revenue for the Festival Beach’s ongoing maintenance costs.

Julio uses seeds, seedlings, and compost from SFC’s Spread the Harvest program in the Communal Plot. “We don’t have any funds to be buying compost. And since we’re able to go to [SFC], and we’re able to get seeds and plants from y’all, it’s a big help. Because then we’re able to keep the garden going. And of course, this is allowing to us help the people at RBJ.”

By just being at the garden, Julio says, “you’re doing a lot: you’re inviting, you’re feeding, you’re educating people. Even just people that are walking by.” The impact the garden makes in people’s lives—including his own—is inspiring to Julio. “It feels good to help people. It feels good to be able to give something to someone who really needs it. It’s nice for them to be able to come, and feel welcome.”