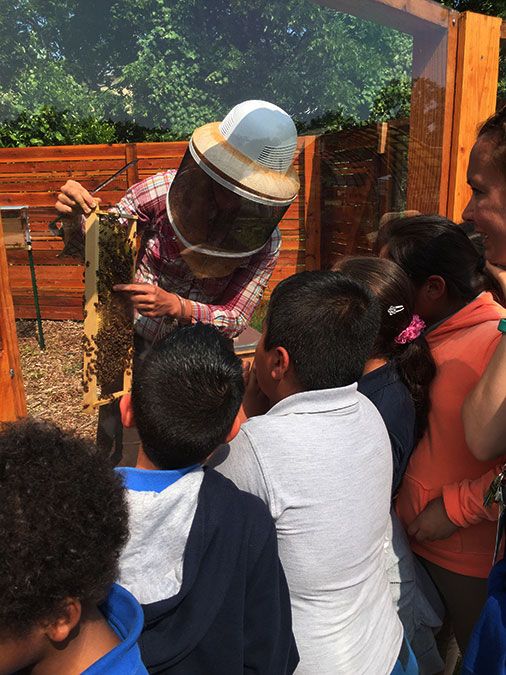 Checking in on the Bees

Last month, honeybees were introduced to their new homes in SFC’s Teaching Garden. Before they arrived, I worked with volunteers from Trinity Episcopal School to assemble two Langstroth hives, which we ordered from Bee Thinking, a business located in Portland, Oregon. In the meantime, I purchased two packages of honeybees from BeeWeaver Apiaries, and after a white-knuckled drive from Dripping Springs, carrying thousands of bees in my minivan, I arrived at the garden, unscathed, with two boxes full of bees waiting to be released into their hives. A few days later, Tara Chapman of Two Hives Honey held a class on how to install bees into a new hive. Eleven participants who were awaiting their own packages of bees watched intently as Tara pierced the little cap on the cage that held the queen and placed it in the hive box. She explained that the worker bees would chew their way through the candy cap to get to the queen. By the time they consumed the cap, they would have grown accustomed to the queen’s unique pheromones and would accept her as their queen bee. It was informative, fun and unforgettable watching a beekeeper shake and dump thousands of bees out of a box into a hive.

As all beekeepers must do, both of SFC’s beekeepers, Tara Chapman and Brandon Fehrenkamp, make frequent visits to the Teaching Apiary to check on the health of the hives. On Tara’s second or third visit back to check on the hives, she noticed that one of the two Langstroth hives was not doing very well while the other was very active and prolifically making brood comb. In Tara’s words, while one of the hives was “kicking tail”, the other was “struggling a bit.” Tara has a few theories as to why, which she explained in an email.

Right after install, the queen was lagging. She took a while to start laying, and wasn't laying much. The population immediately dropped significantly---the likely culprit was that she was a weak queen with weak pheromones. As a result, more than half the bees (if not 2/3) likely settled in the other hive, which is probably why it’s booming. I gave them a frame of brood from the other hive a few weeks ago. When I checked yesterday, the population was really small, and it appears they tried to rear a new queen from the eggs I gave them. There are a few eggs, but they are sparse and in a bad laying pattern. One of two things is going on: either she's in there (though neither Brandon nor I could find her) and she's super poorly mated or faulty in some way, OR she's not laying at all and laying workers have started to lay. I am suspecting the latter. I gave them another frame of brood from the strong hive, with emerging brood (to immediately boost population) and some eggs to see what they do with it. (see if they try to rear a new queen).

In order to remedy the situation, Tara purchased a new queen, which she installed in her little candy-capped cage a couple of days ago. She reminded me that this is exactly why it is a good idea to start keeping bees with two or more hives if you can afford it. You can share resources between the two hives. If you have only one hive that fails because the queen is weak or dies, without another hive nearby, the entire hive will swarm or die. In our case, because one of the hives was so prolific, Tara could take healthy frames from it and add them to the struggling hive to try to help it thrive.

To really sweeten this happy ending to a struggling start, a group of third graders from Andrews Elementary just happened to be at the SFC Teaching Garden on a field trip when Tara arrived with the new queen. The group helped her light the smoker and watched as she donned her protective gear and went in the apiary. She pulled out the frames and talked to the students about what she was doing each step of the way. It was a fascinating experience for the kids! We will post more updates on the bees, and stay tuned for information on upcoming beekeeping classes.