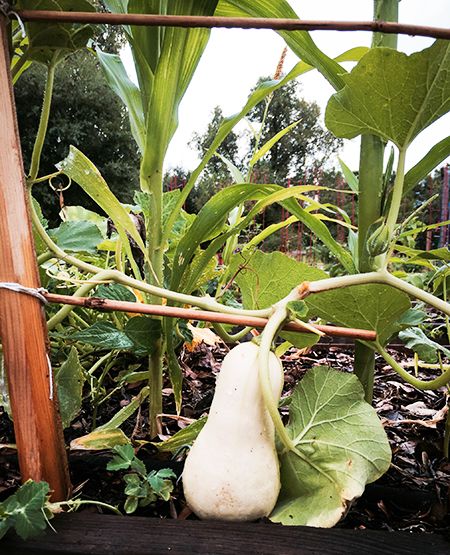 Pumpkins are an iconic fall fruit: they’re what we use to carve our jack-o-lanterns, bake our pies, and cook our soups. But pumpkins are only one of a broad and colorful array of winter squashes. There are a few--perhaps surprising--reasons to branch out from your usual pumpkin and try new varieties of winter squashes.

1) While not every winter squash has the ideal shape for carving spooky faces, most measure up to pumpkins as sweet fall treats. Acorn, butternut, hubbard, cushaw, and turban squashes share pumpkin’s rich, sweet flavor; smooth, dense texture; and impressive nutritional profile (they are all high in vitamin A, vitamin C, folic acid, iron, and niacin). They also come in a delightful variety of colors, shapes, and sizes.

2) A plethora of winter squash varieties exist that are well suited to our hot, often dry growing conditions. Squashes are native to the Americas, and they have been cultivated and eaten by indigenous groups in the Southwest United States and Mexico for millennia (one source indicates that pumpkin seeds dating back to 7000 BC were found by archeologists in a tomb in Central Mexico). Through this long history of cultivation, generations of indigenous farmers have made available an abundance of heirloom squash varieties that are well adapted to our climate.

3) Finally, and most importantly, there are social and environmental reasons to plant “outside the pumpkin box.” As with other crops, the diversity of squash varieties is threatened by the privatization of seeds and by the consolidation of seed companies under a few large agricultural and chemical companies. These companies have taken ownership of traditionally cultivated seed varieties through patents and have drastically narrowed the variety of seeds commercially available by removing many varieties from their inventories. Traditional farmers and other advocates throughout the world are resisting this threat to our collective agricultural biodiversity and food heritage through political efforts, awareness-building, and seed-saving initiatives (learn more through La Via Campesina, Native Seeds/SEARCH, and Seed Matters). By exploring and growing lesser-known, regionally-adapted winter squash varieties in exchange for the standard fall pumpkin, you can contribute toward this vital effort in your own garden.

When it’s time to plant squash again in early March or in late July through mid-August, we encourage you to try growing a few heirloom varieties adapted to the Southwest region, such as the ones available through Native Seeds/SEARCH. Your garden will yield exciting new winter squashes to spice up your fall treats while also helping to preserve a piece of our region’s agricultural heritage.