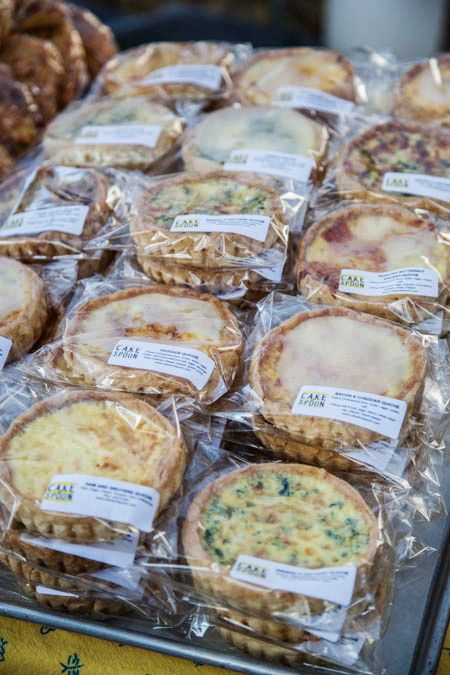 Melissa Brinckmann and The Cake and Spoon

I have tried them all (mostly as I worked for another bakery at the Farmer’s Market) - Chocolate Hazelnut Tort, Frangipane, Pecan, Lemon, assorted Berry flavors, the sweet and the savory, all resting in correct and delicate crusts. The table was covered in small, Euro-Texan treasures.

Melissa Brinckmann’s The Cake and Spoon was unique as soon as it arrived, six years ago, at the SFC Farmers’ Market Downtown in August of 2009.

The beginning of a new day at SFC Farmers’ Markets comes in waves; early birds arrive just before the 9:00am bell, and are some of the most educated and demanding shoppers. The Cake and Spoon’s line of adoring and sleepy regulars is there before the bustle of the full market begins, seasoned and patiently arranged, like Austinites queueing patiently for Barton Springs to open, or for a KLRU taping. We know the good stuff is worth the wait, and we love to share it!

Melissa Brinckmann began her journey to that weekly Saturday morning adoration by working for another market vendor, Sticky Toffee Pudding, perfecting her skills and building her network. As Sticky Toffee began to take off, it out grew the SFC Farmer’s Markets and launched into retail stores, leaving a sweet and savory(and temporary) hole in the Market. Melissa stepped out of the kitchen and onto her own path to launch The Cake and Spoon, with no advertising, from scratch preparation, local sourcing when she could, and the goodwill and word of mouth built with a rain or shine dedication to her customers and community at the Farmers’ Markets.

Six years later, Melissa brings the same passion to local sourcing, the same curiosity for famers’ ingredients, the deep connections in the community, rising at 2:30 am to mastermind jams, glazes, preserving local fresh flavors. And, now, as the season is upon us, pear scones return, to acclaim and appreciation. As ever, Melissa is in touch as she has been from the beginning, making local delicious and sustainable food.

Some things have changed for The Cake and Spoon. The line at the SFC Farmers’ Market Downtown might not be the longest line her products serve. That honor goes to Franklin Barbeque who proudly features The Cake and Spoon at their famous and independent food shrine. The Blanton Museum has taken note as well, catering events with specially prepared items. Melissa says she loves the community at the Farmers’ Market too much to open a brick and mortar location.

Isn’t it about time you come down and see what all these people have been enjoying for the last six years? Did I mention the Pear Scones are back…get them while they last!