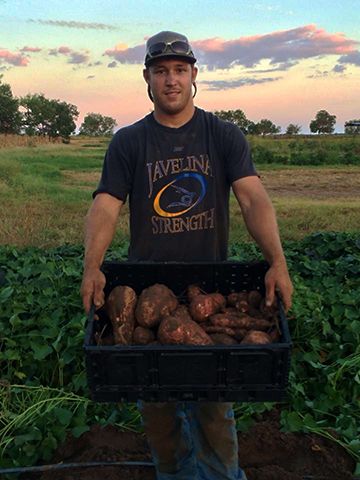 Three years ago, Steven Kubena of Kubena Farms decided to take the plunge and go into business growing fruits and vegetables on the family farm. Since then, Steven has been hard at work on the farm in Seguin, TX growing everything from juicy spring strawberries to some of the biggest heads of winter cabbage around. He stays busy year ‘round planting, harvesting, and cultivating produce on their 25+ acres of land, taking advantage of Central Texas’ mild winters by growing crops in greenhouses and out in the fields. In short – he’s a busy guy.

The Kubena Family hasn’t always been in the produce business, though. A couple decades ago, Kubena Farms was a dairy, where Steven was introduced to farming as a kid. The dairy barn is still up on the hill, albeit absent of cows. “I grew up on a dairy farm,” Steven told me, “and I wanted to continue that farming tradition. The resources were all there and I just went with it. It was an easy fit.” Now, below that dairy barn, fields are abundant with their new agricultural endeavor – fresh fruits and vegetables. This new direction has provided their family farm the opportunity to flourish again.

Steven, alongside his mother, father, and brother Josh plant the fields, harvest, and sell their produce through a variety of channels in Central Texas. As you plan your Thanksgiving feasts this year, you might consider buying your family’s food directly from a family farmer you know and trust. If you’d like to purchase fruits, vegetables, or canned goods from Kubena Farms, you can find them at the SFC Farmers’ Market at Sunset Valley every Saturday morning from 9:00 – 1:00 and The Pearl Farmers’ Market in San Antonio also on Saturdays 9:00 – 1:00. Kubena Farms also sells through SFC’s Farm to Work and Farm to Cafeteria programs, where they supply produce to work sites all around the Austin area and to the University of Texas cafeteria.

Right now, Kubena Farms has an abundance of sweet potatoes, and with Thanksgiving coming up we thought we’d provide a recipe from SFC’s The Happy Kitchen/La Cocina Alegre cookbook: Yammy Muffins!

Zest 1 tablespoon of orange peel. Squeeze 1/3 cup of juice from the orange.

Add the wet ingredients to the dry ingredients, stirring just until moistened.

Bake for 25-30 minutes or until a toothpick inserted in the middle comes out clean.

*White whole wheat flour is a whole grain. It is flour made from light colored variety of wheat.