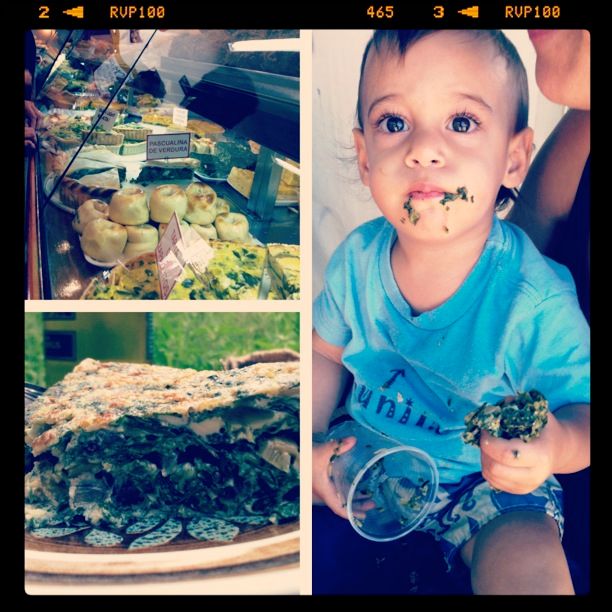 This originally appeared on Saltskitchen.net by Rebecca Saltsman.

Miramar is a small seaside town just outside of Mar Del Plata, Argentina. It’s where Argentines go for the summer to relax, unwind, avoid the city’s oppressive heat, and to be with family. I went in February for about a week of my 3 week journey from Patagonia to Buenos Aires. My cuñado (brother-in-law) grew up spending his summers with family and friends in their cabañas here on the Atlantic Ocean. There’s a routine, an art to the relaxation at the beach here. It involves not planning a thing. It involves a lot of food. And it involves many hours on the sand and in the water. Leisurely breakfast of media lunas and café (sin leche please) followed by a stroll down to the water. Lunch in the cabaña or back at home. Swim, swim, sleep, swim. Head to the cabañas for family teatime with cakes and alfajores. Home for a shower and a rest. Out to dinner or grilling on your own parilla. Repeat.

On day 1 in Miramar the family took us to Rotimar. Here we picked up lunch and snacks for the day. My favorite thing: Tortilla de Acelga (Swiss Chard Spanish Tortilla). I couldn’t get enough of it. Neither could my (then) 1-year old nephew. We shared a large portion more than once and now that I am home, I’ve decided I need to recreate it. Next step? Bringing some to Eliseo for the ultimate test: will he eat mine with as much relish?

This week I made it for a picnic in the park. It’s a very versatile dish. It’s simple, tasty, and of course naturally gluten and dairy free.

Chop off only the very tough ends at the end of the chard. In a pot of boiling water, cook the chard, covered, for about 2-3 minutes. Strain and set aside to cool.

Heat 3 Tablespoons of olive oil in a 9 or 10 inch non-stick skillet. You can go slightly bigger or smaller depending on how thick you want the tortilla, but it will change the cooking time. Saute the onion in the olive oil until translucent. While the onion is cooking, squeeze out any excess water from the swiss chard. Dice the chard, including the stems. When the onions are cooked, add the chard and saute together until mixed (just 1-2 minutes).

In a mixing bowl, whisk the eggs, nutmeg, salt, and pepper together. Add the chard/onion mixture, mix and let sit for a few minutes. Wipe out the saute pan and coat with the remaining 1 Tablespoon of olive oil. Over low-medium heat, pour the egg mixture into the saute pan. Cook over the low-medium heat until the tortilla starts getting solid around the edges, but not brown. Now watch carefully and when the center of the tortilla is no longer liquid, you are ready to flip it.

Serve cold or at room temperature.