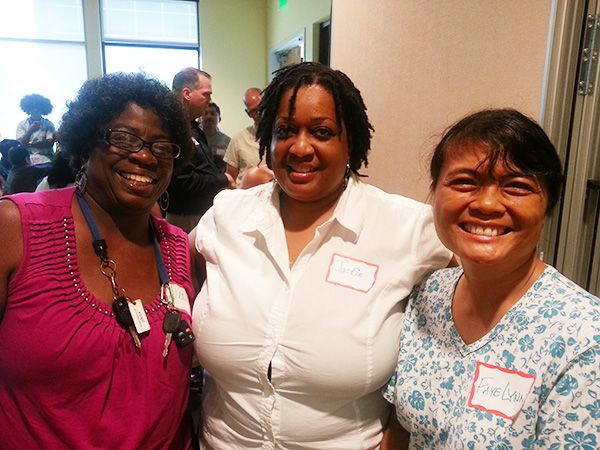 On June 22, SFC’s The Happy Kitchen/La Cocina Alegre® (THK) Program honored it’s Facilitators at the annual Facilitator Dinner. THK has a roster of 43 Facilitators, who are trained peer leaders from the community who are responsible for leading all of the free classes throughout the Austin area. This past fiscal year, the Facilitators lead a total of 24 six-week series for over 550 individuals, and lead an additional 13 one-time classes for THK class graduates to help folks continue to maintain healthy eating and cooking skills. THK Facilitators are an integral part of the program—without them, THK would not be able to operate!

The unofficial theme of the evening was flexibility, as we presented an activity to highlight the many situations in which Facilitators have to be flexible in their role because so many things can come up when offering these classes in the community. I say the theme was “unofficially” flexible as the dinner had to be rescheduled due to the torrential rains and flooding that occurred on the evening of the original date.

Here are some of the flexible highlights our 2014-2015 fiscal year:

Jackie, Steve and Brittany led a “202” series for six-week series graduates. They featured seasonal produce items from Farmshare Austin each week. Fennel and kale were more popular than radicchio. Cooking with the season requires being open to whatever is coming up from the ground that week!

Evita gave out over 50 samples of the THK recipe, Marinated Beets, at Southwest Key’s Cinco de Mayo event—even after THK staff learned the day before that the event would be outdoors and all samples would have to be pre-packaged. We’re so thankful we now have a kitchen that allows us to be prepared when situations change at the last minute!

Mary, Yoshi and Stephanie had to be extra flexible during a class at HEB Riverside with a big crowd, tiny room, and childcare in the manager’s office. Yes, we offer free childcare to the parents attending our free classes—even if it means turning the manager’s office into a child-friendly spot.