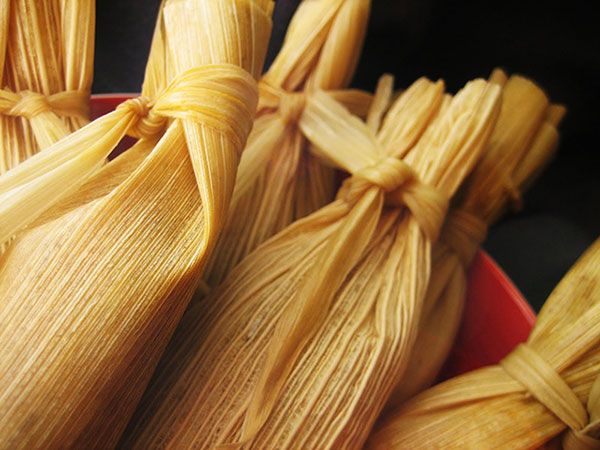 In the middle of the afternoon, everyone gathers around a big sack of corn. From little children to grandparents, they separate the grains from the cobs. The women take the separated kernels, throw them into the air and catch them—allowing the wind to take away some of the loose hulls. Then, they rinse the kernels and cook them in limewater. This is the ritual of the nixtamalization process. From this corn, tortillas, gorditas, tlacoyos, huaraches, sopes, atole, corundas and tamales are made—food that’s the basis of the people’s livelihood and nourishment.

Traditional diets and food preparations evolve through trial and error, and corn is a good example. It was a lucky accident when the Mesoamericans decided to soften corn hulls with limewater, which is highly alkaline. In addition to breaking down the hull and softening the grain, the process also made nutrients more available for absorption and improved flavor and aroma. Imagine women observing the poor health of families and realizing that the only difference between their diets and those of healthier families was the absence of lime when cooking the nixtamal. This knowledge, passed to the next generations, soon became part of the heritage.

Not long ago, I heard about heirloom seeds. The term was intriguing— a simple seed could carry heritage? I never thought about it this way, but it’s true. My grandfather used to grow beans, squash, watermelons, gourds, loofas and, of course, corn. Like every farmer before him, he was careful to save seeds from the plants he preferred. There at his farm, the food was especially tasty—everything was freshly harvested and prepared. My memories of the flavors are still fresh: warm tortillas with beans, cabbage, fresh cheese and a little bit of chile piquin ground in a molcajete, and soft, thin-skinned avocados mixed with tomatoes, chilies, onion and cilantro. He grew the best avocados I have ever eaten, but they were impossible to transport to the market because, with their thin skins, they bruised easily and lost some of their delicate flavor. The point is that my grandfather learned through trial and error that saving certain seeds had real benefits because of the close correlation between flavor and nutrition. His careful and diligent practices became part of my family’s heritage and now my livelihood.

I coordinate Sustainable Food Center’s The Happy Kitchen/La Cocina Alegre® cooking and nutrition classes taught in Spanish. Spotlighting culturally appropriate foods, age-old preparations and heirloom recipes are important parts of our classes. We believe that preserving and sharing our traditional foods, methods and practices will help keep our heritage alive.