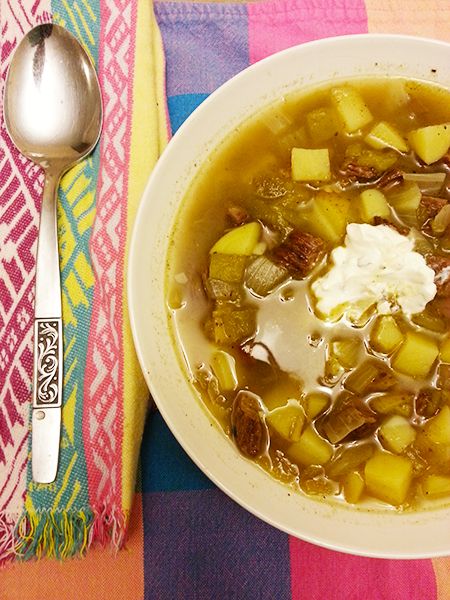 End of the Month Resolution Check – In

I’m more of a “shoot-from-the-hip” kind of cook, meaning I usually buy ingredients that stand out to me (Beets are in season! I’m hungry for lentils! Oooo, a huge jar of roasted green chiles!) and create something out of that, rather than shop for ingredients that follow a specific recipe. That being said, trying new recipes is a great way to pick up some new ideas and techniques – and looking for recipes to try was actually more fun than I thought!

It was cold and rainy last week, and the Potato and Green Chile Stew with Cilantro Cream from Deborah Madison’s book, Vegetable Soups caught my eye (D. Madison is my favorite cookbook author!) I chose this recipe because it included ingredients that I happened to have in my refrigerator and pantry: potatoes, a large jar of already roasted green chiles from Costco (we love to add them to eggs on the weekend!) and already cooked fajita meat that was frozen. The original recipe calls for freshly roasted green chiles, but the jarred ones for Costco worked great and were definitely a time saver. The best part of this stew was that the flavor was even better the second day…and it was gone in a flash! The recipe below is the version I made; I changed a few things to save time.

Heat the oil in a wide soup pot and add the onion, potatoes and cumin. Turn to coat with oil, and then cook over medium heat, stirring occasionally, until golden in places, about 8 minutes. Add chiles and garlic to the liquid. Stir and bring to a boil, then lower the heat and simmer. Cover and cook for 15 minutes. Add meat. Cook for another 10 minutes, or until potatoes are soft. Add salt and pepper to taste.

For cilantro cream sauce: In a small sauce pan, bring 2 cups of water to a boil. Submerge cilantro in boiling water for several seconds, then rinse under cold water and pat dry. Chop finely and then stir into sour cream.

Serve the stew with a dollop of sour cream in each bowl.