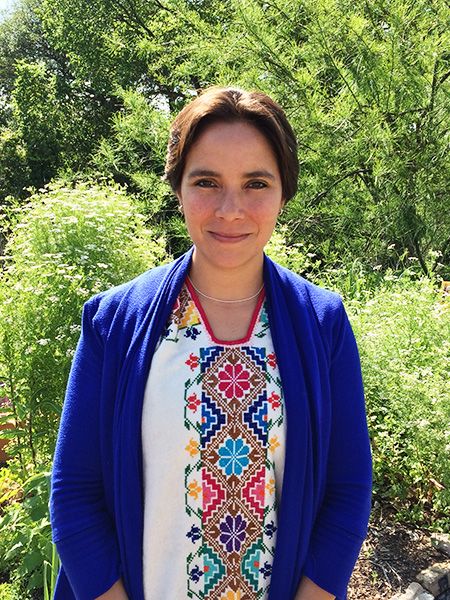 Daniela Ochoa moved to Austin in 2009, and credits her connection to SFC to an introduction to a staff member at a dinner party. She started volunteering and was especially interested in SFC’s garden resources when she realized that her carrots in Texas wouldn’t grow as well as they did where she grew up in central Mexico.

She helped start a community garden at St. Martin’s Lutheran Church, learned about the local soil and drought, worked with City of Austin’s composting program and completed her Master Gardener certification. She now teaches SFC’s Basic Organic Gardening classes in English and Spanish, and recently translated the updated curriculum to Spanish. While giving presentations on composting, she also connected with the SFC Farmers’ Markets and with SFC’s The Happy Kitchen/La Cocina Alegre®.

We recently spoke with Daniela about her participation in the recent Happy Kitchen class for cancer patients and caregivers, and her connections to SFC and to good food.

I had a family member experiencing cancer and I was interested in the information. I had taken the Knife Skills class, so I found out about the class and wanted to sign up. I like that SFC also talks about preventing illness.

Did you learn any tips or recipes that you’ve used?

The mineral broth was amazing. I think everyone should make it—it’s magnificent! Thanks to this class, I also add ginger to my tea and to hibiscus water.

Do you have any favorite memories or experiences with SFC?

All of the classes in Spanish. I love listening to the stories of Spanish speakers and seeing partnerships arise as they learn from their neighbors. When the community garden at 5604 Manor was getting started, they were looking for ways to get the community in that area more involved, and it was great to see how SFC’s Basic Organic Gardening class really brought in the neighbors. One of the things overall that SFC has really nailed has been the progress towards inclusiveness and diversity. Facilitating classes in Spanish lets me bring my full self, and for Spanish speakers in the class, it’s empowering them in their comfort language to be more at ease in the class. And even when people in the class speak different languages, they connect during the class. They see each other’s faces and reactions. Maybe they both freak out to see a bug in the garden, but then learn that it’s a beneficial bug. These are bonding experiences.

Have food, gardening, and sustainability always been part of your life?

Yes, because we all eat, but I didn’t always think about it. When you’re surrounded by food systems, like the Wednesday market I could walk to in Mexico, you don’t have to think about it. You could know the farmers and have those relationships very easily. When I moved away, going to the market was a way to get back to my roots, and a way to connect with other people. I’ve also come to love sharing food. Sharing food with others is a way to share a little bit of who you are. This is why I also enjoy volunteering teaching Spanish and Latino Cooking with Cooking Up Cultures.

Do you have any advice for others who are thinking about getting more involved with SFC, or more connected to where their food come from?

Do it! And do it now! If you wait until your kids are grown or until you have a job, or until the right moment, time will pass you by. Getting involved will be so satisfying and end up benefiting other aspects of your life, too.

Any plans for Earth Day?

To be with the Earth! We’re going camping to be with and enjoy nature.